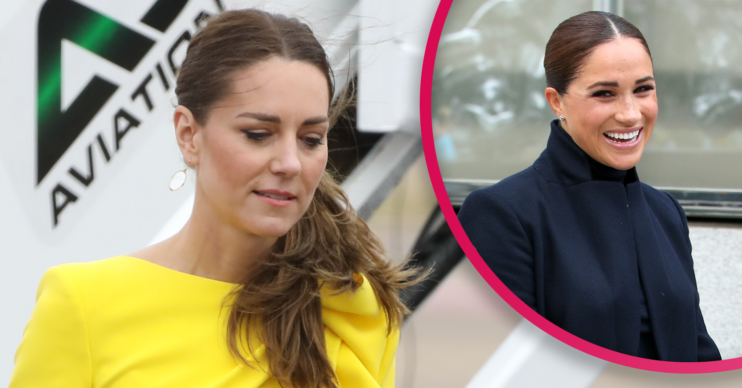 They say Kate snubbed Meghan at the Commonwealth Service

Duchess Kate was apparently given the “cold shoulder” upon arrival in Jamaica, royal watchers have commented.

Kate and husband Prince William were met by a group of the island’s leaders when they touched down on the Caribbean island.

As a result, some fans were seen to call the exchange “karma” for how Kate allegedly treated the Duchess of Sussex.

What happened with Duchess Kate and Lisa Hanna?

After landing in Jamaica, Kate and William met Jamaica’s leaders.

Lisa Hanna, who won Miss World almost 20 years ago, was among them and the ladies’ first meeting was certainly jolly.

However, when the ladies were seated next to each other later on, onlookers on Twitter appeared convinced the pair were seen having an “awkward” conversation.

Read more: Will and Kate leave royal fans gushing as they show off their dance moves

In a clip shared to Twitter, Kate can be seen turning towards Lisa with a smile on her face.

Lisa promptly looks the other way, causing Kate’s smile to fade and her head to face forward once more.

Royal watchers on Twitter have suggested that the exchange was deliberate, and “karma” for Kate’s alleged snub of Meghan at the Commonwealth Service.

What happened at the Commonwealth event?

In another clip that went viral, the Duke and Duchess of Cambridge are seen arriving at the ceremony in March 2020.

They are seated in the front row and exchange pleasantries with Prince Edward and wife Sophie, who are seated behind.

Sitting next to them was Prince Harry and Meghan.

However, Kate and William appear to ignore the couple, quickly sitting down in their seats instead.

How did royal watchers react?

As a result of the encounter, many commented on the clip claiming Lisa was serving “karma”.

“Karma is always on time,” declared one.

“Her KARMA for what she did to Meghan at the Commonwealth Service! Embarrassing!!!” said a second.

“That one was for Meghan! Thank you Lisa,” said a third.

“Kate tonight: Lisa Hanna made me cry,” mocked another.

“For just a second, I felt a twinge of pity for Kate getting the cold shoulder,” declared one.

“Then I thought of Meghan and thought NAWWW. Karma baby,” they added.

How did Lisa react to the claims?

However, one royal fan commented on the video with another video showing the ladies appearing to have a nice chat.

“They seem to be getting on well here,” they said.

Lisa is a member of the People’s National Party, which is committed to removing the Queen as head of state and wants to lobby Britain for reparations.

But until then we will always remain a courteous and respectful country.

She posted pictures of herself and Duchess Kate to Instagram and revealed they shared a “pleasant” conversation.

Lisa added: “There’s no doubt at this time that we all seek our true independence and want to develop systems and strategies where we become free from the monarchy.

“But until then we will always remain a courteous and respectful country.”