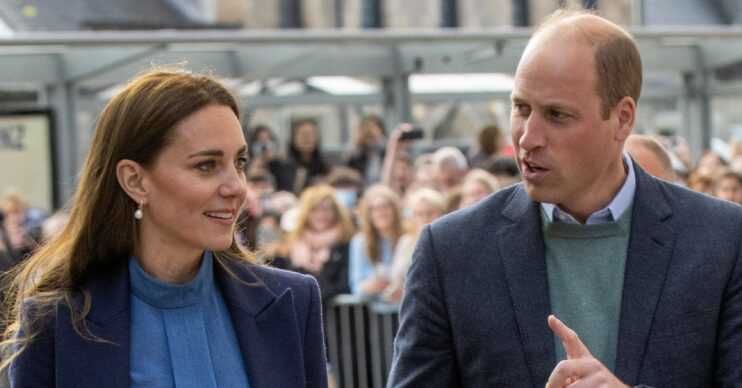 The royal couple were in Glasgow yesterday

The Duchess of Cambridge, Kate Middleton, and Prince William are set to push royal boundaries when it comes to parenting their children, according to a body language expert.

The royal couple’s parental side shone through during a visit to a school in Glasgow yesterday (Wednesday, May 11).

Yesterday saw the Duke and Duchess of Cambridge make their first appearance in Glasgow.

They were there as part of a tw0-day Platinum Jubilee tour of Scotland.

During the visit to the Scottish city, William and Kate visited Glasgow University, as well as a school.

It was in the school where the royal couple’s parenting sides shone through.

Body language expert Darren Stanton, speaking on behalf of Slingo, spoke about what he saw from the royal couple.

“Heading to a Scottish school, we saw Duchess Kate and Will interacting with young school children, as well as mothers and their babies,” he said.

“It was clear to see their parental side shining through.”

Darren continued, saying: “Kate’s maternal instincts [were seen] kicking in throughout the engagement, like when she read to a baby or stopped to interact with a group of young children – kneeling to ensure she was on their level.”

The body language expert continued, saying that there was an “ecstaticness” behind Kate’s smile.

He also said that her happiness was “extremely visible”. It’s because of this authenticity that the British public have taken the future Queen into their hearts, according to Darren.

“We haven’t seen any royal of her like since Princess Diana, where the public have taken her into their hearts so strongly,” he said.

“Keen to get stuck in, Kate kneeling and sitting with the children alongside William suggests how the Royal couple are keen to do things their own way,” he said.

He then said that we would never have seen the Queen do something like this.

Darren continued, saying that William and Kate will push royal boundaries a bit more, unlike the Queen.

“Kate and William have shown they are going to operate within the tried and tested boundaries of senior royals, yet they have a more hands-on approach and a desire to get in amongst the thick of things with everyday members of the public,” he said.

Such hands-on behaviour suggests a lot about how they intend to raise their children.

Darren then went on to say that it’s clear that William and Kate have a different parenting style to that of the Queen and Prince Charles.

And he admitted that it looks as though Kate and William have a clear vision of what they want their children’s future to look like.

“Kate and Will were quite happy to sit cross-legged on the floor, interact with other parents and play with the children,” he said.

“Such hands-on behaviour suggests a lot about how they intend to raise their children,” he continued.

“With the couple intending to be 100% around for their children while juggling their royal commitments as senior royals.”

Concluding his analysis, Darren said that the Glasgow trip has shown that the couple has an authenticity and genuine happiness about them.