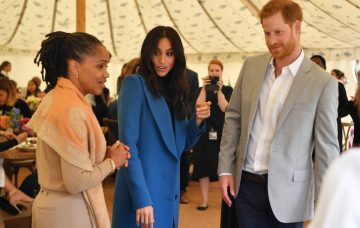 This will be Doria's first grandchild

The Duchess of Sussex’s mother is “very happy” about becoming a grandmother for the first time.

Kensington Palace has revealed Doria Ragland is over the moon that daughter Meghan, 37, is expecting her first child with husband, Prince Harry.

A spokesperson said: “Ms Doria Ragland is very happy about the lovely news and she looks forward to welcoming her first grandchild.”

Meghan is known to be very close to her mother, who was the only member of her family invited to the Royal Wedding in May.

Doria travelled with Meghan in her car to the wedding after flying in a few days before to meet the Royal Family.

In a rare break from royal tradition, Doria attended an engagement with Meghan and Harry, 34, in September.

She joined the couple for a function at Kensington Palace to support the launch of a charity cookbook backed by Meghan that raises funds for the community affected by the Grenfell Fire last year.

Doria introduced herself as “Meg’s mum” and spoke about her pride in her daughter.

It’s unclear whether Meghan’s father, Thomas, has been told.

Thomas did not attend the Royal Family after pulling out at the last minute due to ill health following claims he’d cooperated with paparazzi on set-up photos.

It’s not known whether Thomas has met Harry in person yet; he said in an interview with ITV’s Good Morning Britain in June their only contact to date had been via telephone calls.

In that interview, Thomas had predicted Meghan and Harry would announce baby news sooner rather than later.

Their Royal Highnesses have appreciated all of the support they have received from people around the world since their wedding in May and are delighted to be able to share this happy news with the public.