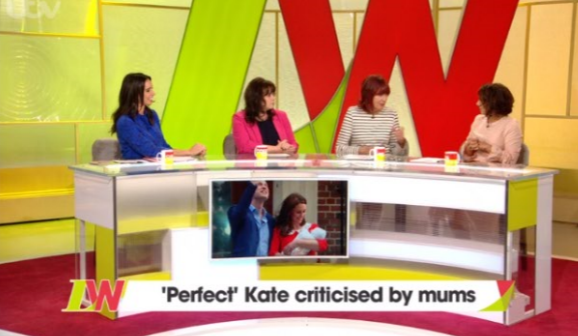 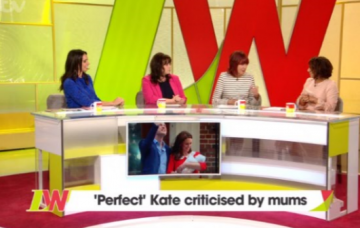 They called on people to "stop having a go" at Kate

The Loose Women have defended the Duchess of Cambridge for having an “immaculate” appearance after the birth of her third child.

Kate, 36, was criticised by some who accused her of looking “too good” and setting an “unrealistic example” to other new mums, with her perfect look outside the Lindo Wing as she presented her new son to the world.

The Duchess wore a designer red Jenny Packham dress and heels, with bouncy, blow-dried hair as she cradled her new son with husband Prince William by her side.

Kicking off the discussion on the ITV show on Wednesday, Saira Khan said: “Can I just say, let’s stop having a go at Kate. I can’t believe people are having a go because she made an effort, because she didn’t have swollen ankles, because her hair was immaculate.

“So what? She looked fantastic, she’s just given birth.”

Host Christine Lampard agreed, saying: “What do people want? Do they want to see her looking really rough? I don’t, she’s a Duchess!”

Coleen Nolan replied: “If she had come out looking rough, that would have been worldwide so she can’t win really.”

Saira added: “I think we need to stop beating women up whether they look good or bad. The great thing is she’s had a healthy baby, she’s delivered the baby, and she’s out there pleasing the crowd, which is her job.”

Christine went on to say that she had extra admiration for Kate for being able to walk elegantly and confidently down steps from the maternity ward in front of the world’s press while holding a baby and wearing heels.

Kate and the Duke Of Cambridge welcomed their third child on Monday, who is fifth in line to the throne.

The couple have yet to announce the name of their son, but Arthur and Albert are among the favourites.

Speaking at a memorial service to commemorate Anzac Day today, proud dad Prince William said mother and baby were in “good form” back at their Kensington Palace home.

He said: “Sleeping’s going reasonably well so far, so he’s behaving himself, which is good news.”

Should Kate have been criticised for her post-childbirth appearance? Leave us a comment on our Facebook page @EntertainmentDailyFix and let us know what you think!