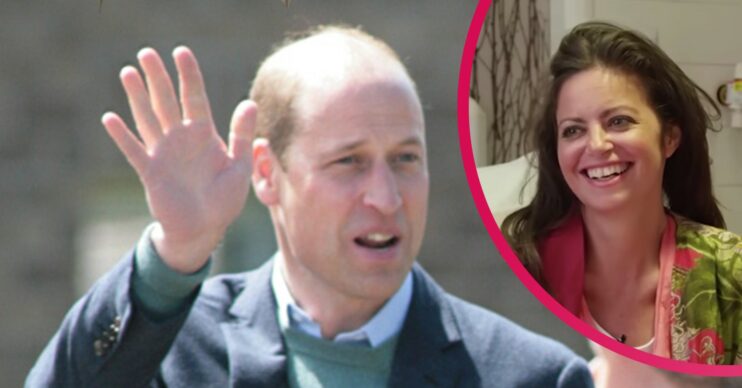 He hand-delivered it to her parents' house in Surrey

Deborah James has shared her disbelief after Prince William turned up at her parents’ home to present her damehood.

The campaigner, aka Bowel Babe, was made a Dame by the Queen after raising millions of pounds for Cancer Research UK.

Deborah, who is 40 and co-founder of You, Me and The Big C podcast, is dying from bowel cancer.

She is now receiving hospice care at her parents’ home.

On Friday (May 13), Deborah and her family enjoyed a surprise afternoon tea and champagne with Prince William.

The Duke of Cambridge travelled to Woking, Surrey, specifically to present the mum-of-two’s damehood.

As President of the Royal Marsden hospital – which specialises in cancer treatment and research – he also discussed his passion on improving the outcome of those living with the disease.

Dame Deborah has now shared a selection of photographs from his visit.

The former head teacher was wearing a pretty white dress and had a huge smile on her face in the snaps.

Her husband Sebastian and their children joined her in one.

In another, she laughed while posing for a selfie with William and her brother.

“I am utterly honoured that he joined us for afternoon tea and champagne, where he not only spent a generous amount of time talking to my whole family but also honoured me with my damehood.

“It’s quite surreal having a royal pop in at home, and yes you can imagine the cleaning antics and preparation went off the scale – but it was all irrelevant because William was so kind and he put us all at ease.

“He is clearly passionate about improving oncology outcomes as the President of the Royal Marsden.

“It was such a special day for my whole family, making memories to last a life time. He’s welcome back any time!”

Deborah has been fighting bowel cancer since being diagnosed in December 2016.

Throughout her battle, she has worked tirelessly to raise awareness of the disease.

In March 2018, she launched the award-winning podcast You, Me and The Big C with her friends Lauren Mahon and Rachael Bland.

Read more: Dying Deborah James ‘blown away’ as she’s made a Dame by the Queen

Rachael, a BBC Radio presenter and mum-of-one, sadly died from breast cancer in September that year.

On Monday, Deborah confirmed her active cancer treatment has stopped.

While announcing the tragic news, Deborah launched her Bowelbabe Fund. Although she had hoped to raise £250,000, the current total already stands at more than £5.6million.

Number 10 Downing Street confirmed on Thursday that she would receive a damehood.