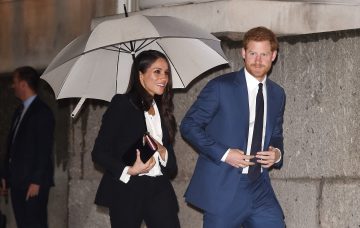 And didn't she look stylish doing it?

Proving she’s a total pro under pressure, future royal Meghan Markle just saved the day at an awards ceremony, after her co-host lost his script.

Oh, and she looked stunning while she was at it.

The Endeavour Fund ceremony, where Meghan, 36, was presenting an award, celebrates the achievements of wounded, injured and sick servicemen and women.

Kensington Palace announced ahead of the event, held at London’s Goldsmiths Hall: “Each of the veterans has overcome adversity and used adventure as a catalyst for their recovery.”

The Suits actress arrived in the pouring rain with Prince Harry, but things didn’t go quite as smoothly inside the venue!

Taking to the stage, Meghan told the audience she was “truly privileged” to be there, and introduced the “Celebrating Excellence Award”, before waiting for her male co-host to announce the winner.

An awkward silence followed as he then struggled to find the right script, looking helplessly at her.

Meghan laughed, and the audience laughed with her, as she stepped in to help.

Meghan Markle steps in to lend a hand as one of the speakers at the Endeavour Fund Awards loses his notes at the podium – handling the mishap like a pro pic.twitter.com/9x0utU7WV8

Her co-presenter said: “Excuse me – we’ve got different notes. I have the first one – do you have the second one?”

Meghan replied: “I’ve got mine, hang on.”

The audience cheered when they finally managed to announce the winners.

Meghan broke with tradition by not wearing a dress for the royal engagement – and she looked all the more amazing for it.

Instead she opted for a suit, by British designer Alexander McQueen.

It’s a favourite designer of her soon-to-be sister-in-law, Kate, who wore an Alexander McQueen wedding dress for her big day in 2011.

Read more: Prince Charles and Camilla are on This Morning!

Twitter loved the video, writing: “She’s nice and fun”. Another added: “She’s her own woman, love it.”

It’s no surprise Meghan handled the difficult moment so well – after all, she’s been in the spotlight for most of her adult life.

Most notably, she played Rachel Zane in US legal drama, Suits, from 2011, until she quit the show in January.

In an interview with Vanity fair last September, Meghan revealed: “We’re two people who are really happy and in love. We were very quietly dating for about six months before it became news, and I was working during that whole time, and the only thing that changed was people’s perception.”

Read more: The details of Princess Eugenie’s engagement are adorable

The royal couple made their first public appearance together the same month, at the Invictus Games in Toronto.

But this one was a lot more fun, no?