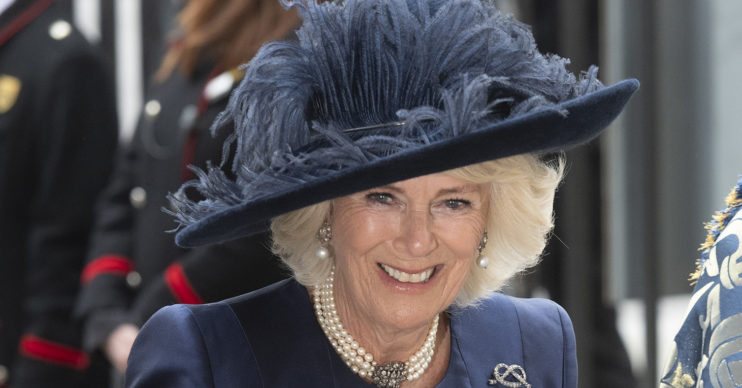 The Duchess of Cornwall, Camilla, formally known as Camilla Parker Bowles, wowed her fans on a recent royal engagement.

She teamed her embroidered outfit with white gloves, handbag and a sandy-coloured summer hat.

She met with dozens of military veterans while visiting the world famous Royal Hospital Chelsea in London on Wednesday.

The Royal Hospital Chelsea is a retirement and nursing home for around 300 British army veterans.

Located in one of the swankiest areas of London, it is known for providing excellent care for retired army men and women.

On Clarence House’s Instagram, it explains that Camilla visited to watch the Chelsea Pensioners on parade.

The Duchess of Cornwall reviewed Chelsea Pensioners on parade

This comes after their annual Founder’s Day was cancelled due to COVID-19 and the lockdown.

Addressing their some 1.1 million followers, they shared: “At the Royal Hospital Chelsea in London today, The Duchess of Cornwall reviewed Chelsea Pensioners on parade.

“The @royalhospitalchelsea was due to celebrate their annual Founder’s Day on 4th June but the event was postponed due to the pandemic.

“The King founded the hospital to give veterans a place to live after retiring from their duties.

“Today the site is home to nearly 300 Chelsea Pensioners, both men and women, who are all former soldiers of the British Army.”

While many royalists congratulated the veterans, many also commented on how well the Duchess looks.

One user wrote: “The Duchess looks lovely!’ and another posted: “Another simply beautiful outfit!”

Yet another gushed: “RH the Duchess of Cornwall is such a beauty and amazing asset to the Royal Family.”

However, some users were a little concerned that neither the Chelsea Pensioners nor Camilla were wearing face masks.

A user asked: “Why don’t these folks wear face masks?” and another user replied: “Same thought I had.”

However, a user reassured them: “They only need to wear them in medical settings or on public transportation. British recommendations are far different from American ones.”

And it is clear from the photos and videos shared that Camilla is maintaining social distance throughout her appearance.