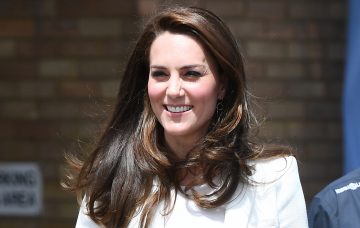 BREAKING: Kate Middleton in labour with her third child

Kensington Palace has confirmed the third royal baby is on the way!

The Duchess of Cambridge has been admitted to hospital in the early stages of labour with her third child.

Kensington Palace released a brief statement on Monday morning just before 8.30am confirming Kate, 36, has been taken to the Lindo Wing at St. Mary’s Hospital in Paddington, London to give birth.

The palace said: “Her Royal Highness The Duchess of Cambridge was admitted to St. Mary’s Hospital, Paddington, London earlier this morning in the early stages of labour. 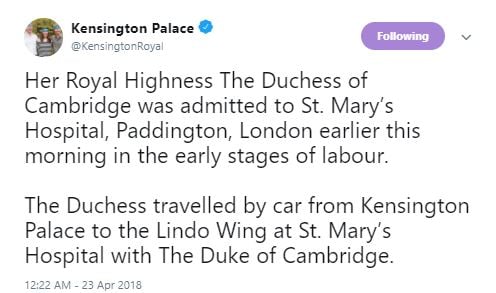 They do not yet know the sex of their third baby.

The baby’s birth will likely be announced via press release and social media, as well as through the old tradition of an easel in the forecourt of Buckingham Palace.

It means Prince Harry will be pushed down to sixth.

Kensington Palace previously confirmed that Kate’s due date was April, but an exact date was never been publicly confirmed.

Royal watchers knew the baby was due soon, however, when parking restrictions went up outside the Lindo Wing earlier this month, while barriers have also been erected in anticipation of the photographers and reporters who will descend on the scene.

It’s not that surprising Kate and William would choose the Lindo Wing for their third child, having seen their first two children delivered there.

Prince George was delivered at the Lindo Wing on July 22, 2013, while Princess Charlotte was born at the private maternity ward on May 2, 2015.

Kate and William announced their third pregnancy in September. As with her previous two pregnancies, Kate suffered from hyperemesis gravidarium, an extreme form of morning sickness.

She went on maternity leave towards the end of March.

Are you excited about the royal birth? Leave us a comment on our Facebook page @EntertainmentDailyFix and let us know what you think!