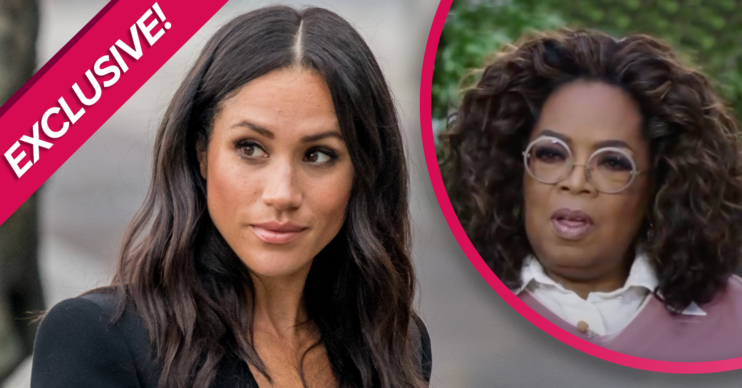 The Sussex brand is now 'more misunderstood than ever'

A branding expert has claimed the Meghan Markle interview that aired earlier this week did the duchess “no favours” when it comes to changing the public’s perception of her.

And, in bad news for Meghan and husband Prince Harry, it seems the chat may well have done more harm than good.

Did Meghan Markle change her narrative with the interview?

“Carrying a very different tone and approach to Prince Harry’s interview with James Corden on The Late Late Show just over a week ago, Oprah’s interview with the Duchess of Sussex didn’t quite have the same impact.

“Or at least, not a positive one,” Matthew told us.

Read more: Royal expert predicts Harry and Meghan will be welcomed back into the royal family

“Prince Harry’s interview with James Corden was upbeat and positive, showcasing his true personality as humble and down to earth. But the interview with Meghan was far from it,” Matthew explained.

In fact, he believes the entire thing felt more like a show with a celebrity than an interview with a member of the royal family.

“The interview with Oprah was typical celebrity publicist activity, with high levels of drama, shock and anticipation.

“With dramatic music, enhanced gasps and a number of cliff-hangers, was this really a tasteful and appropriate move? I’m not convinced.”

Why didn’t she do more?

Matthew said Meghan could have done more when it came to offering guidance for those also suffering from suicidal thoughts.

“With the interview airing in the UK on March 8, which also happens to be International Woman’s Day, it left many people questioning whether this was a deliberate and tactful marketing ploy.

“It may just be coincidence, but as somebody who has worked hard to be recognised as a female advocate over the years, you would assume this would be rather fitting for Meghan and her brand.

“However, with topics discussed such as racism, mental health and female independence, it did leave many wondering why she didn’t provide viewers with more guidance and advice on how and where to seek help for such matters.”

Aligning herself with Diana’s brand

Matthew said the issue also raises the question of whether Meghan was trying to place herself in the shoes of Diana and other independent women?

Matthew explained: “Meghan associated herself with, and spoke very highly of, three people in particular. The Queen, Princess Diana, and Diana’s best friend.

“Was this in the hope that her position would be improved by her close association to such high powered brands?”

But it was in fact, a case of crisis escalation. She simply kicked up a lot of dust but settled none.

Matthew asks if this “going back and forth from strong and independent to calling out for sympathy” has helped Meghan changed the public’s perception of her.

“The interview was surrounded by sadness and negativity, which hasn’t done the Duchess of Sussex any favours in terms of changing public opinion.

“Whilst Harry’s interview [with Corden] was a clear case of crisis management, Meghan’s was nothing of the sort.

“But it was in fact, a case of crisis escalation. She simply kicked up a lot of dust but settled none.”

Matthew said with Harry being interviewed by James Corden, and Meghan opting for Oprah Winfrey, the two chose presenters that reflected themselves and their individual characters.

But explained why this didn’t quite correlate with their supposed alignment and unity.

“The two interviews were polar opposite. Both Meghan and Harry appeared as individuals and as though they didn’t align with one another at all.

“They appeared as separate brands and entities, as opposed to a strong and united couple. This leaves the Sussex brand somewhat even more misunderstood than ever before.

“We’ll just have to watch this space to see their next move and the impact this has truly had, for both the Duke and Duchess of Sussex, and the rest of the royal family.”