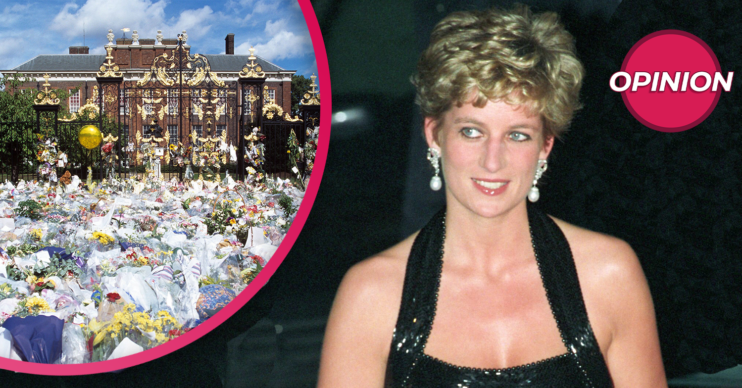 OPINION: ‘The world would’ve been a better place had Princess Diana survived’

Tomorrow (August 31) marks the 24th anniversary of the death of Princess Diana.

That fateful morning is forever etched in my mind.

I woke up early on that Sunday morning and switched on the telly.

Lying on the sofa, I reached for the remote control and turned on Teletext to catch up on the morning’s news.

And it was there that news was slowly breaking that Diana, Princess of Wales had perished in a car accident in Paris.

Death of Princess Diana sparked an outpouring of grief

Tears rolled down my cheeks, but that was nothing compared to the outpouring of grief the nation would go on to show.

They were crying for Princes William and Harry, both so young to lose their devoted mother.

The tears were doubtless for what could have been for Diana and boyfriend Dodi Fayed.

And they were crying because the world would never truly be the same again.

Princess Diana was a true force for good, and I know I’m not alone in the belief that the world would’ve been a much better place had she’d survived that fatal car crash.

A true Queen of Hearts, she was dubbed the people’s princess for a reason.

Kind, compassionate, down-to-earth and ever-loving, I can’t help but imagine what the world would be like now, 24 years on, had she still been a part of it.

So what would the world be like now, had Diana survived?

For starters, the royal rift between her much-loved sons would’ve been over before it began.

The face of fashion would’ve doubtless been different, with women following her lead when it came to elegance and decorum – and not the bum-skimming dresses celebs wear these days when they’re falling out of clubs.

She’d have done so much for those less fortunate, entering the world stage and standing alongside the likes of President Obama as a real force for good.

Her work with those affected by the AIDS epidemic was unprecedented, she worked with the homeless, people affected by leprosy and cleared landmines.

She took risks because she knew these risks were what was needed for the world to become a better place.

But who’s around to do that now? It’s something that’s severely lacking, not just in the royal family, but on the world stage as a whole.

I honestly can only see that she’d have used her power, celebrity and influence for even more good in the decades that have passed since her death.

She had such a role still left to play, and that’s what makes this so very sad – her life was cut tragically short when she was just 36 years old.

The world is undoubtedly a poorer place because Diana is no longer a part of it.

Selfless, giving and much missed

Of course it’s easy to turn someone who is no longer here into a saint after their death, but Diana didn’t have a bad bone in her body.

She was selfless and giving and, despite her royal status and relationship woes, always put others before herself.

Stepping out of the shadow of the royals, she was in a place where she was finally free to do what she wanted with her life.

Whatever she decided to do, I guarantee she wouldn’t have slipped out of the limelight – she’d have worked to make the world a better place.

Death of Princess Diana left a million what ifs

Although she was never destined to sit on that throne, she’ll forever be a queen in my heart and the hearts of millions of others.

Tomorrow will be a time for remembering a mother, a humanitarian and one of life’s good people.

But it’ll also be a time of mourning for what could have been had Diana survived that fateful day.

So many what ifs linger so poignantly in the air.

What if she’d worn a seatbelt? What if her driver had been sober? And what if the paparazzi hadn’t chased her car?

What if she’d never married into the royal family?

What if she lived?

That one’s simple. The world would’ve undoubtedly been a better place because she’d still be in it.