The Duke and Duchess of Sussex have only just began their royal tour in South Africa, but Meghan has already wowed us with her stunning looks over the past few days.

Meghan and Harry arrived in Cape Town on Monday with their son Archie and immediately got stuck into royal duties, meeting locals and charity workers in the city.

On the first day, Meghan stunned in a £69 black and white maxi wrap dress from Mayamiko with a pair of black wedged sandals. 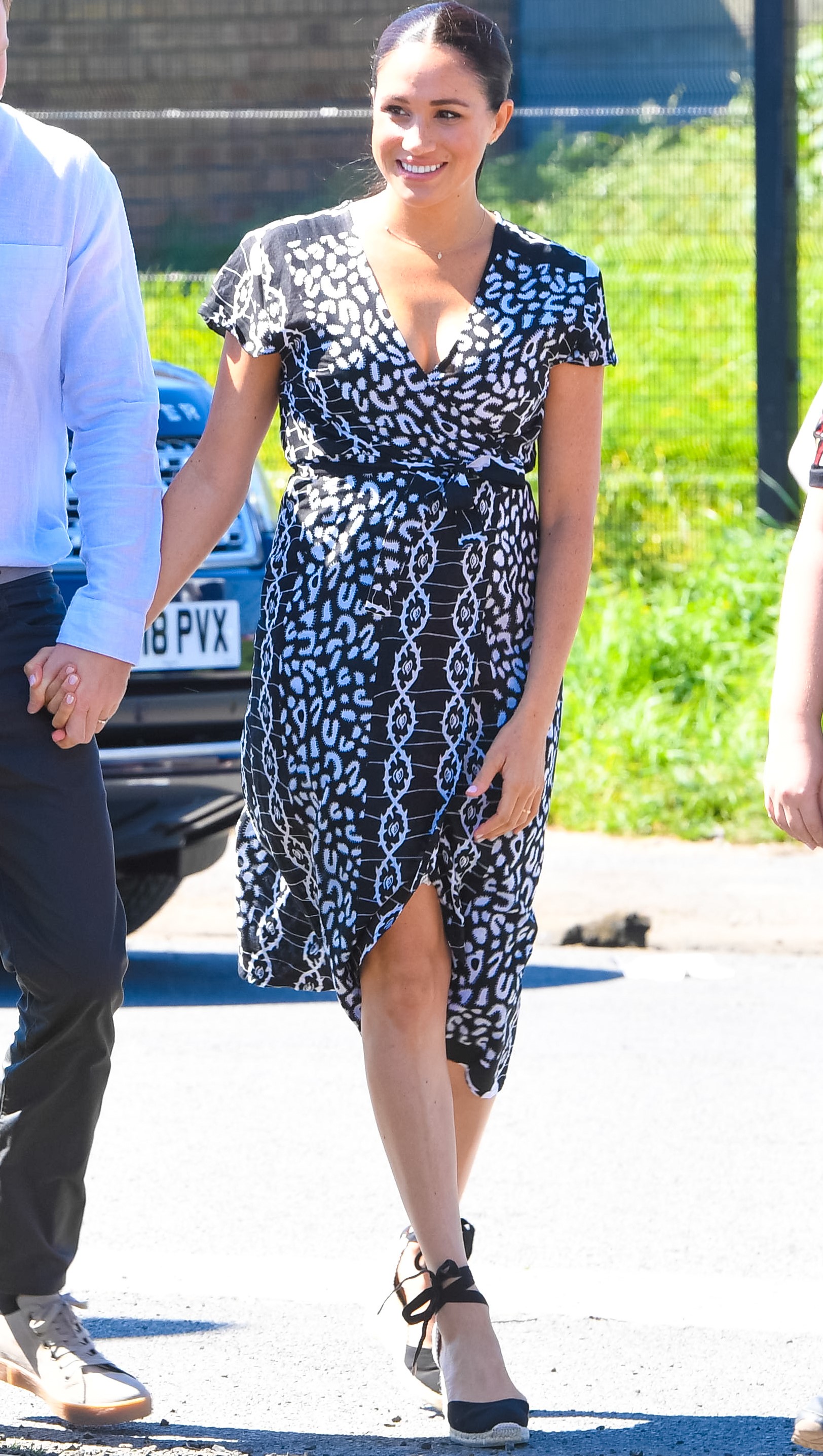 Read more: Archie steals the show as he makes royal tour debut with Harry and Meghan

During the outing, Meghan and Harry visited the Nyanga Township in South Africa.

The couple met children and locals at the Justice Desk initiative, which teaches children about their rights and provides self-defence classes and female empowerment training to young girls in the community.

In the evening, Meghan changed her outfit and slipped into a stunning blue wrap dress as she and Harry arrived at the District Six Museum.

She paired the £465 blue shirt dress by Veronica Beard with the same black wedged sandals from earlier in the day. 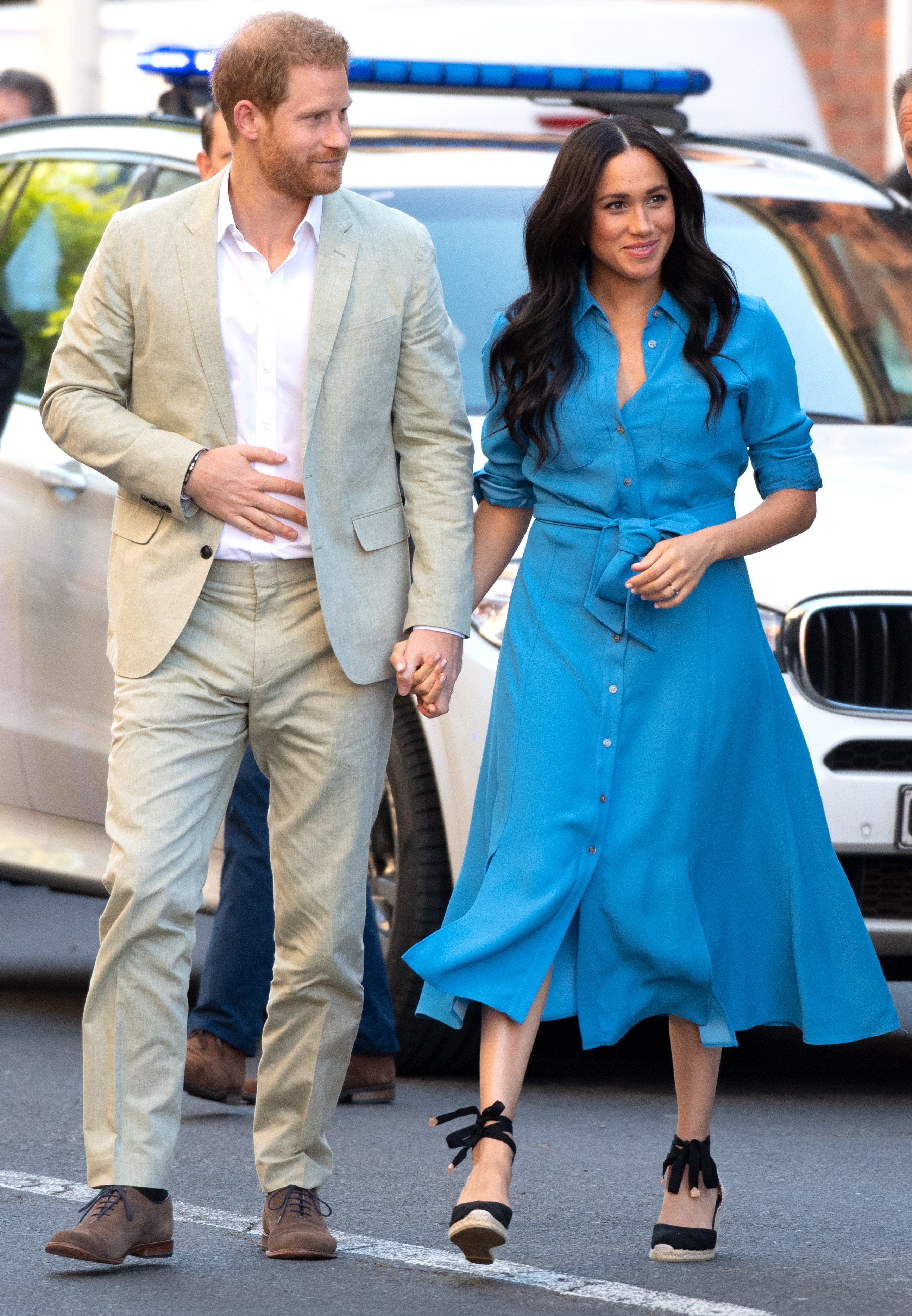 But fans noticed the former actress had recycled the dress as she previously wore the chic ensemble during the couple's visit to Tonga's Tupou College on their royal tour last October.

On the second day, Meghan opted for a more casual look as she and Harry visited Monwabisi Beach.

The visit highlight the benefits of networking between aspiring female entrepreneurs and successful female role models.

She wore her hair tied back in a bun. 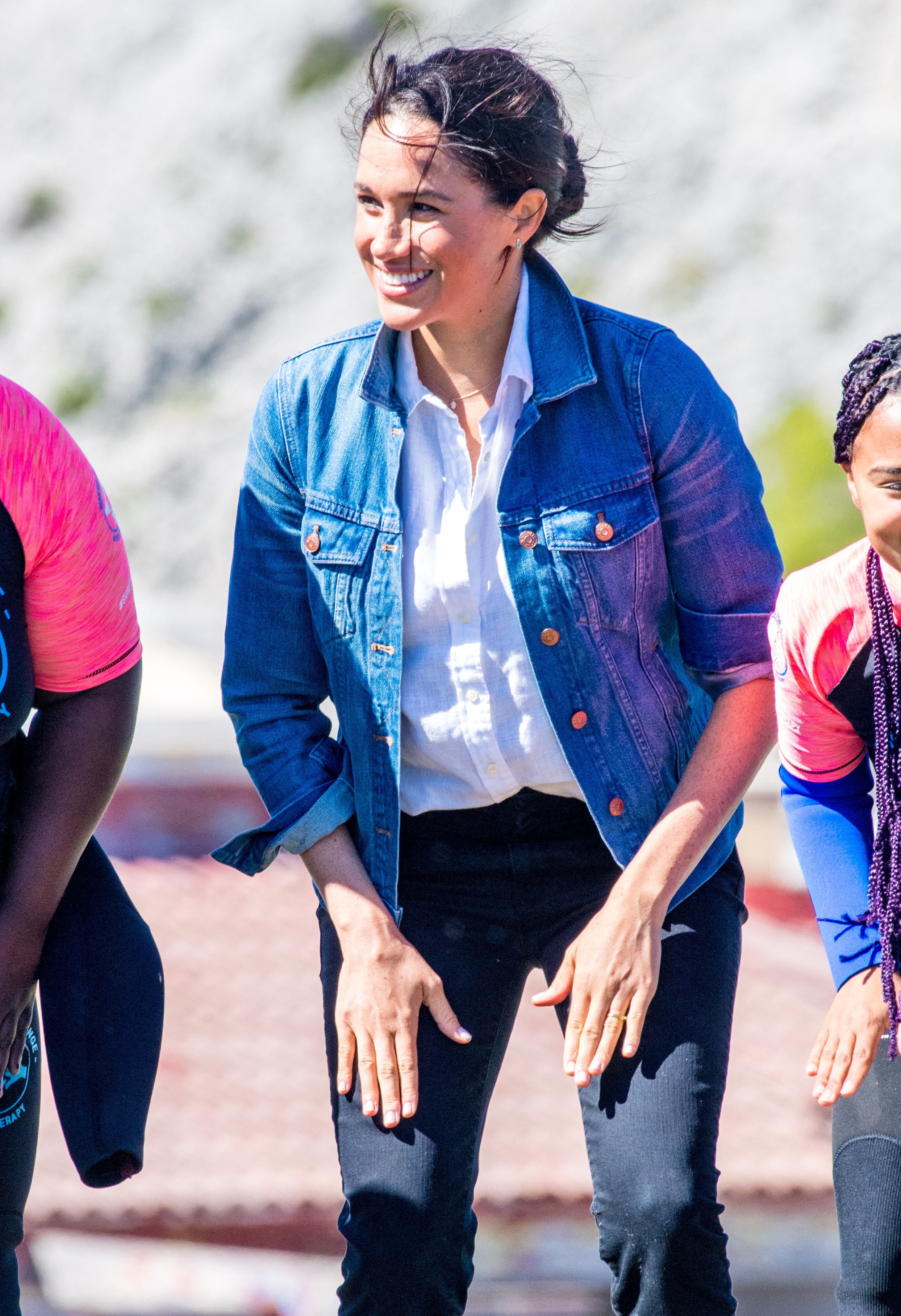 Meghan opted for a casual look on Tuesday (Credit: Wenn)

The couple were there to learn about the work of Waves For Change, an organisation which trains and supports local surf mentors to provide mental health services to young people.

On Tuesday afternoon, Meghan and Harry visited the Bo Kaap area, where they went inside the Auwal mosque.

The Duchess wore a stunning £260 floor-length olive green dress with a scarf to cover her head. 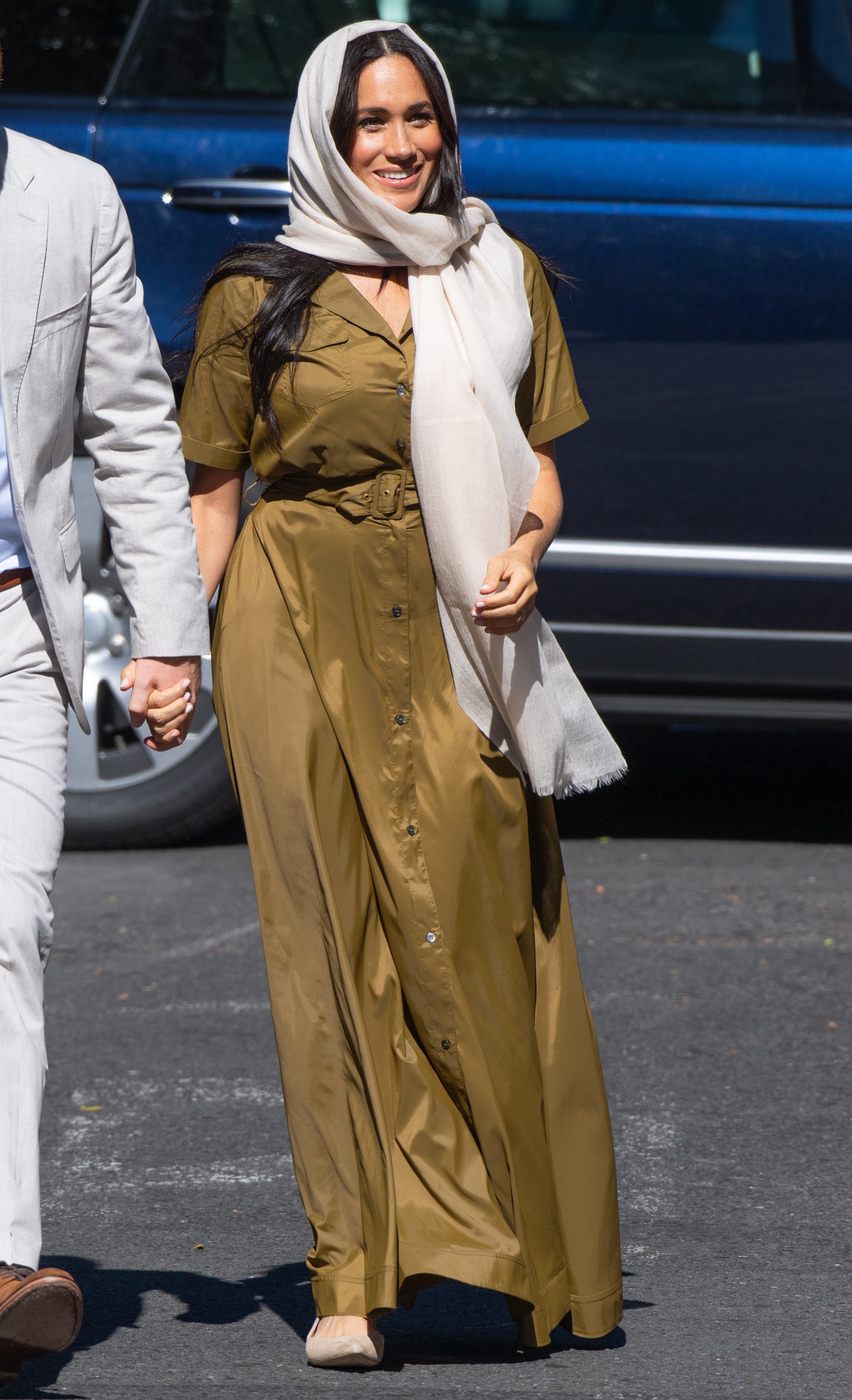 The Duchess wore a stunning £260 floor-length olive green dress with a scarf to cover her head (Credit: Splashnews.com)

Meghan later removed the head scarf and sported a purple flower in her hair as she and Harry met locals in the Bo Kaap area.

They also popped into a family's home for tea. 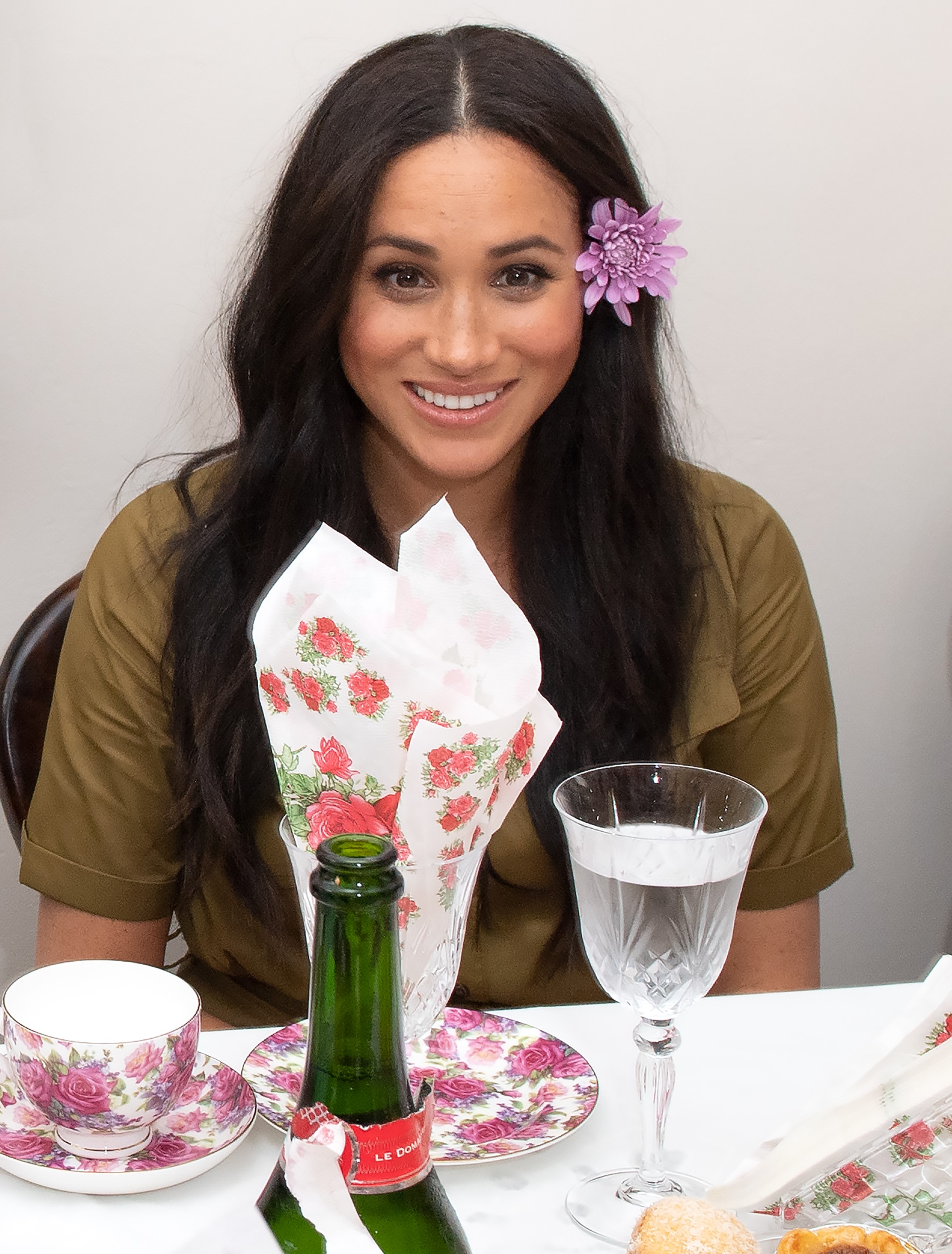 Meghan and Harry had a cuppa at a family's home (Credit: Splashnews.com)

She once again recycled the outfit after first wearing it during a visit to Bondi Beach in Sydney last October.

Yesterday, the Duke and Duchess attended the Youth Reception at the High Commissioner's residence. 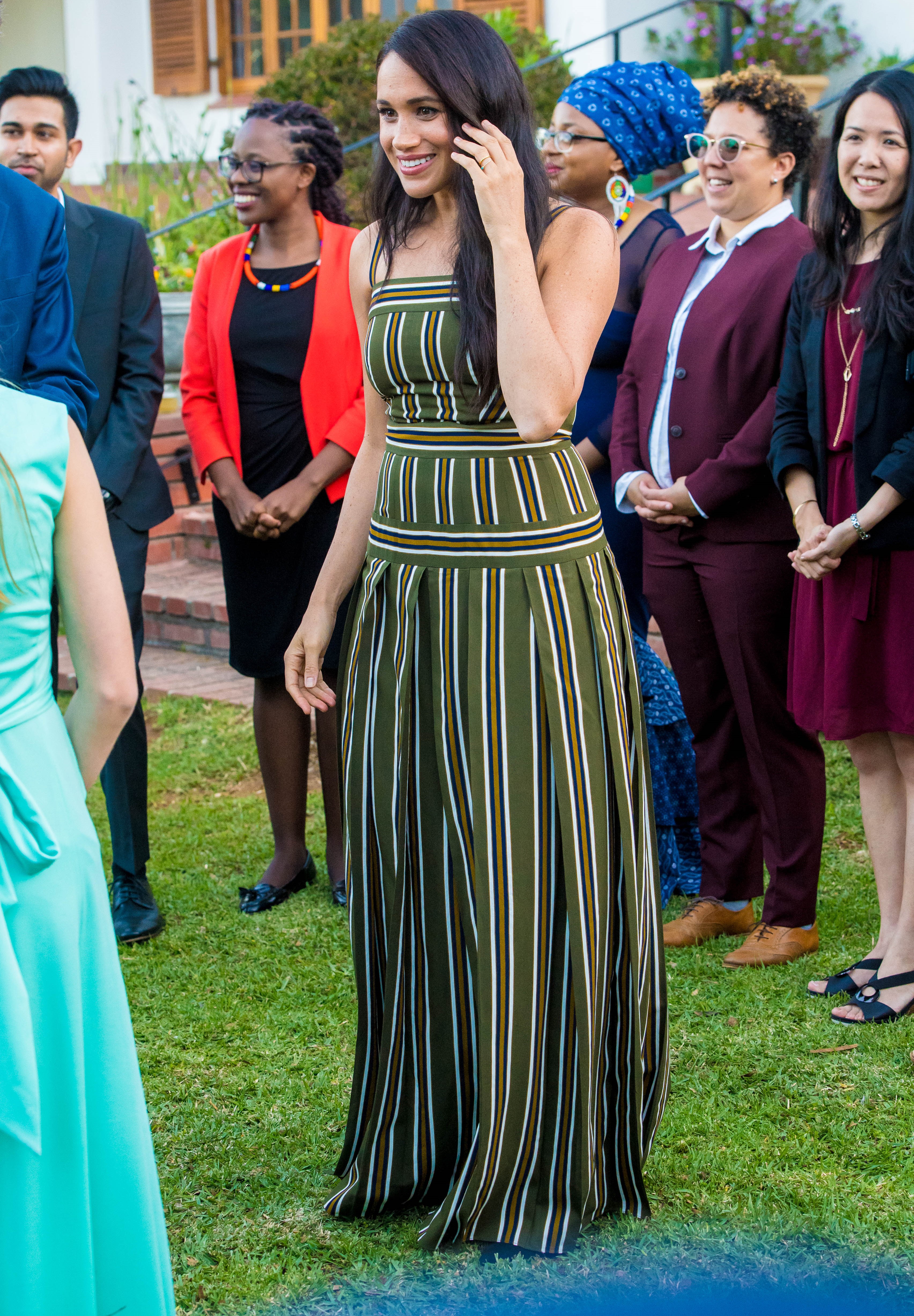 On Wednesday, Meghan and Harry stepped out with their four-month-old son Archie to meet Archbishop Demond Tutu.

Meghan looked glowing in a blue and white printed dress, which is said to be from Club Monaco and priced at £368.

She wore her hair in a sleek bun as she doted on baby Archie. 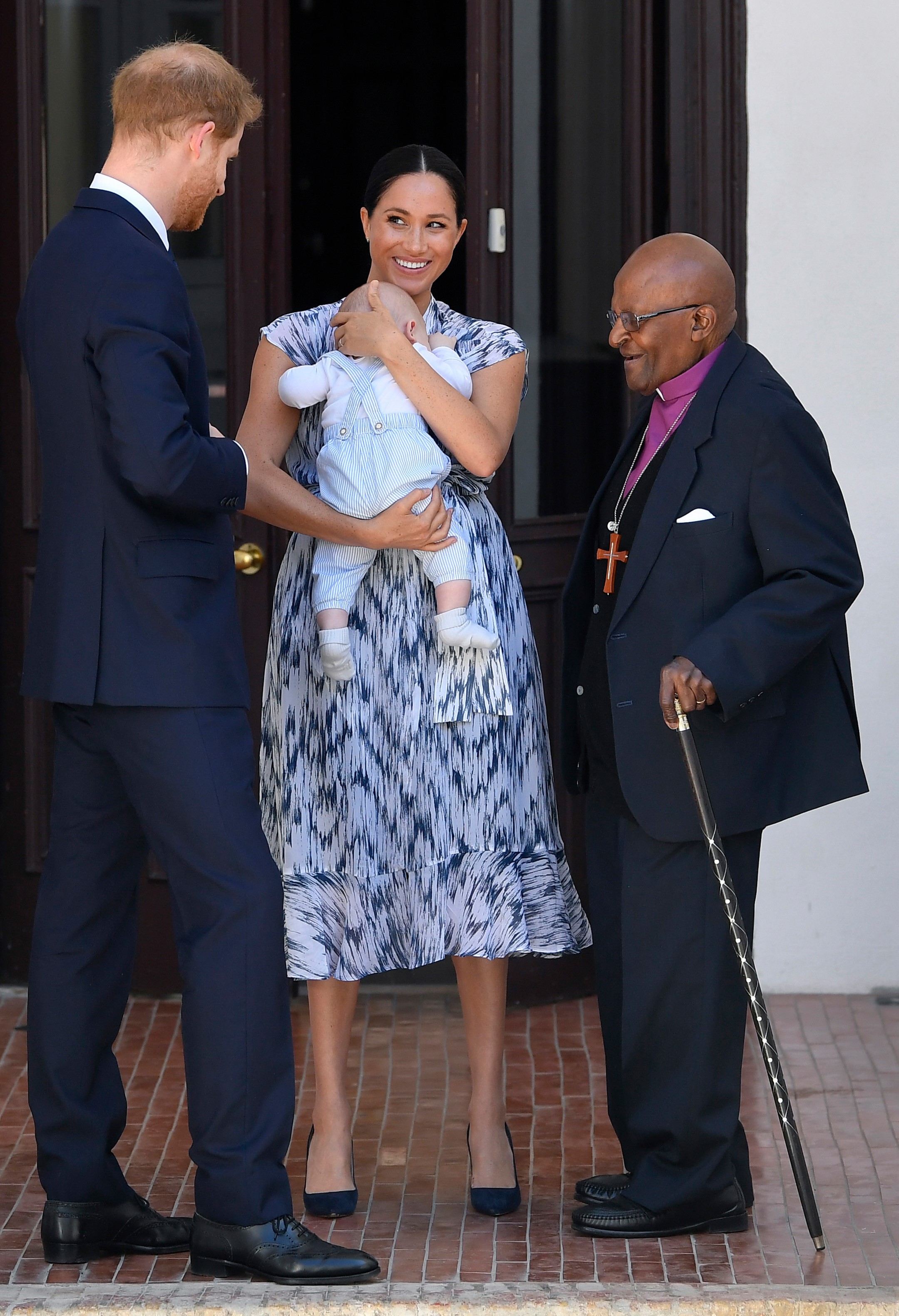 Read more: Harry and Meghan share kiss as they gush about being parents

The Palace said the visit will "highlight the benefits of networking between aspiring female entrepreneurs and successful female role models".

Meanwhile, Harry will board a plane to Botswana for a solo engagement.

What do you think of Meghan's outfits so far? Leave us a comment on our Facebook page @EntertainmentDailyFix and let us know.