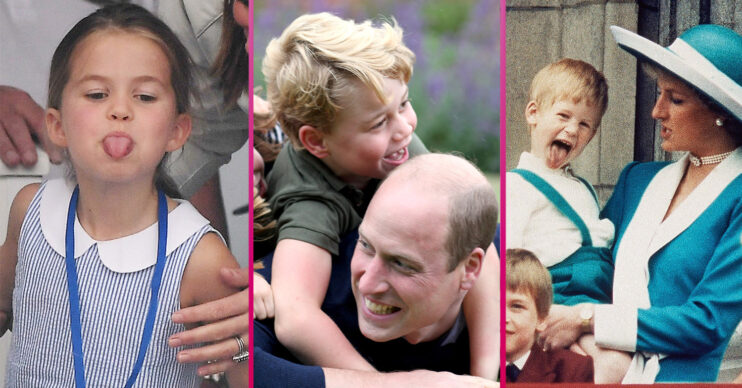 Blue blood is just as given to tantrums!

The royal children always seem to steal the show when they are seen in public.

It’s quite rare to see the kids, but we do get lucky during special occasions or in the odd Instagram post.

Here we take a look at eight moments when they have proven they’re just like regular kids despite their royal status.

Prince William and Kate Middleton’s daughter, Princess Charlotte, is no stranger to being a bit cheeky in public.

In August 2019, Charlotte attended the King’s Cup Regatta with her brother Prince George and their parents.

But one adorable moment saw Charlotte poke her tongue out at spectators leaving her mum Kate in hysterics.

2) George, Charlotte and Louis enjoy quality time with their dad

Another moment which melted royal fans’ hearts was an image shared to Instagram showing the Duke of Cambridge being a doting dad with his kids.

In the photo, Prince George, Princess Charlotte and Prince Louis all dive on their dad as they enjoy some time away from the spotlight.

And they proved they’re just like any other children away from the spotlight.

Now one thing that every parent has experienced is their child having a tantrum in public.

And the royals are no different.

Both George and Charlotte have had the odd tantrum during an outing.

George was given a talking to after he appeared to have had enough at the Royal International Air Tattoo in July 2016.

But in no time, George was back smiling and showing off his charm to visitors.

Meanwhile, Charlotte was left in tears after she fell over while touring the Airbus Factory in Hamburg in 2017.

Poor Charlotte, who was two at the time, fell and her mother Kate picked her up and comforted her.

The little girl wiped away tears, before getting on with the visit with brother George.

George and Charlotte aren’t the only young members of the royal family who have suffered a tantrum in public.

Zara and Mike Tindall’s daughter Mia also had a meltdown during Festival of British Eventing at Gatcombe Park in 2015.

Mia, who was one at the time, cried and stamped her feet as she was pulled away from a generator.

However, she was eventually carried back to the stands!

Another sweet moment showing the royal children just being regular kids is when they enjoyed a small picnic in summer 2019.

Prince William and Prince Harry took part in the match.

A photo shows Prince Louis sitting on Kate’s lap as she held a Tupperware box of food.

Meghan Markle also joined the royals, with son Archie – who was only a couple of months old at the time.

William is seen holding the dog up to younger brother Harry while on holiday with their parents, Prince Charles and Princess Diana.

Finally, we have another throwback shot of a young Prince Harry on the Buckingham Palace balcony.

The picture shows Harry sticking out his tongue while being held by mum Princess Diana.

A young William was seen stood in front of his brother and mother, as he smiled at the crowds while resting his hand on his face.

Read more: Royal insider: Is Kate Middleton a princess? Why isn’t she styled like Princess Diana?

The Queen‘s sister Princess Margaret was also seen in the snap.