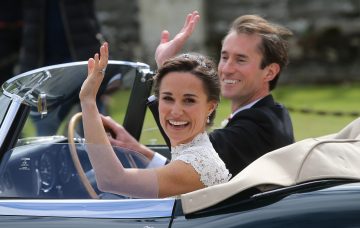 Pippa Middleton and James Matthews have named their newborn son in a touching nod to family members.

The baby, Arthur Michael William Matthews, includes a tribute to three of their close relatives.

Pippa, the Duchess of Cambridge’s sister, gave birth to the boy at the Lindo Wing of St Mary’s Hospital in Paddington last month.

Now the name of the infant, who entered the world at 8lb 9oz, has been ‘revealed’ by The Mail on Sunday.

His first middle name, Michael, is understood to be after both Pippa’s father and James’ tragic brother who died aged just 23 climbing Mount Everest in 1999.

The inspiration for his other middle name is thought to be from the new mum’s brother-in-law Prince William.

Pippa reportedly put her occupation as “author” on the birth certificate.

Her party-planning book Celebrate was published in 2012.

They announced earlier this summer that they were expecting their first baby.

He was born on October 16 in the same maternity wing where Pippa’s sister Kate Middleton gave birth to her three royal children, George, Charlotte and Louis.

What do you think of the name? Leave us a comment on our Facebook page @EntertainmentDailyFix and let us know what you think!