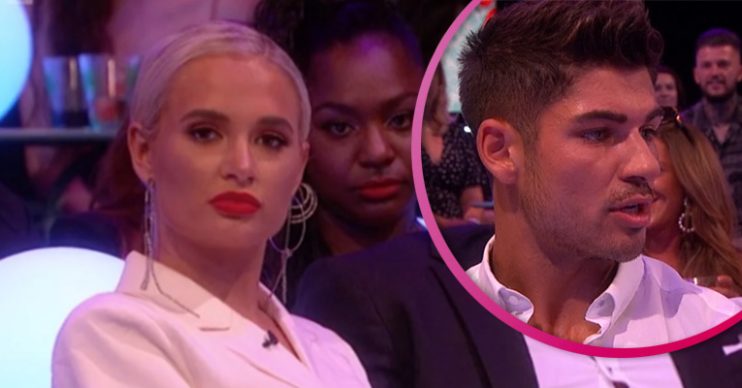 And viewers claim that Molly-Mae mouthed the words ‘[bleep] off’ after Anton insisted he was glad he unfollowed her on social media because they weren’t friends.

It was revealed that Anton had followed Molly-Mae after she voted him and Belle Hassan off the show.

After being interrogated by Caroline Flack, Anton said:  “Molly and I never even spoke in the villa. We never had chats. I have nothing against you but we never saw eye to eye.”

Molly-Mae sitting with Tommy Fury said in reply: “I thought we were friends.”

Anton went onto say that it was his management who chooses to follow or unfollow people on social media.

But when Caroline asked: “Are you going to re-follow her?” he replied simply: “No. I’m not.”

That’s when Molly-Mae appeared to mouth the words “[bleep] off” during his explanation.

“Did Molly Mae just tell Anton to [bleep] off cause he unfollowed her?,” one asked.

Another tweeted: “MOLLY MAE MOUTHING [bleep] OFF TO ANTON.”

“I love Anton, got molly to mouth [bleep] off at him,” a third said.

One other posted: “Anton being savage to Molly and her face. Love you Anton mate!!!”

However, a rep for Molly-Mae told Ent Daily that she actually mouthed the words: “Fair enough.”