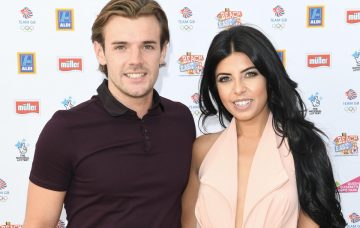 The couple won the second series of the show

The couple, who have seven-month-old son Freddie-George together, revealed they returned to the Love Island villa where Nathan popped the question.

Nathan revealed the ring is a two carat Asscher cut.

The loved-up couple are already planning on where they will wed, however, they have slightly different ideas.

Nathan explained that they have “elderly grandparents” so they would have to “think about the travelling”.

Earlier this year, the couple opened up about how much stronger their relationship is now following their split.

Nathan told OK! mag in April: “Having Fred completely changed our relationship for the better.”

And Nathan also said at the time that Cara is “marriage material”.

When asked if he had any plans to marry Cara, Nathan said: “We’re very string at the minute, you’ll just have to watch this space.

Are you married? If so, how did your partner propose? Leave us a comment on our Facebook page @EntertainmentDailyFix and let us know what you think.