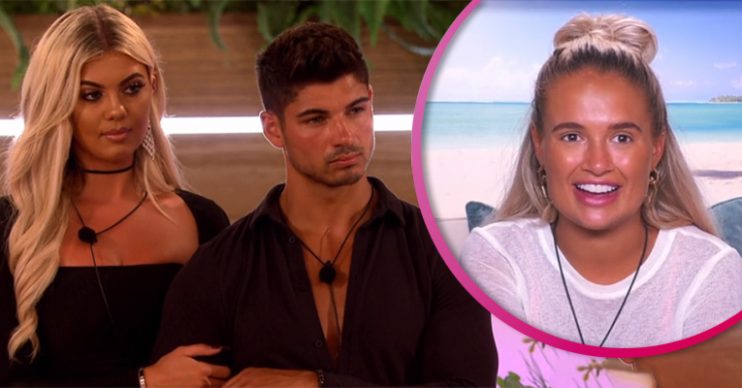 Did the right couple leave?

The pair found themselves in the bottom three alongside Ovie Soko and India Reynolds and Maura Higgins and Curtis Pritchard after Molly-Mae Hague and Tommy Fury voted them the least compatible couple.

Belle has now admitted she was “shocked” that Molly-Mae and Tommy were the only ones to vote them to leave, calling the move “tactical”.

Speaking to The Sun, she said: “I haven’t watched it back yet, however, I do maybe think that could have been tactical.

“I think Molly has too many opinions sometimes. I like Molly, I really get on with Molly, but she can be a little bit two faced, unknowingly.

“She doesn’t mean it, but she does say that. Everyone is entitled to their opinion, but at the end of the day, we will see it for what it is.”

Belle also said that Anton will be annoyed that Tommy lied to him.

She revealed that Anton asked all the boys who they voted for and they all “looked and said, ‘not you mate'”.

Last night, Belle and Anton said their goodbyes to the islanders as they left the villa after host Caroline Flack announced the results.

Alongside Anton, Belle said: “It’s been, thanks to you, an amazing experience. I came here, I got what I wanted.”

Anton added: “My Love Island experience started off slow but ended really fast. It was a great experience, the best experience of my life.

“And to walk out with someone on my arm is just unbelievable. It’s always going to be a hard one, there’s so many strong couples in there at this stage and I can’t complain at all.

“I just wish everyone in the final the best.”

Viewers were gutted to see the pair go, with some calling it a “fix”.

One person wrote on Twitter: “Molly-Mae’s tactic of getting Anton & Belle out worked a treat didn’t it. The fact they only got one vote as well, they shouldn’t of even been in bottom three. FIX.”

Another said: “Maura and Curtis instead of Belle and Anton? What a fix.”

A third added: “Can’t believe what a fix #LoveIsland is!! Belle and Anton should be in the final they only had one vote! So disappointed.”

Molly-Mae’s tactic of getting Anton & Belle out worked a treat didn’t it. The fact they only got one vote as well, they shouldn’t of even been in bottom three. FIX. #LoveIsland

Maura and Curtis instead of belle and anton? What a fix #loveisland

Can’t believe what a fix #LoveIsland is!! Belle and Anton should be in the final they only had one vote! So disappointed @LoveIsland

The Love Island final airs tonight at 9pm on ITV2.

Did you think the right couple left? Let us know what you think by leaving us a comment on our Facebook page @EntertainmentDailyFix.