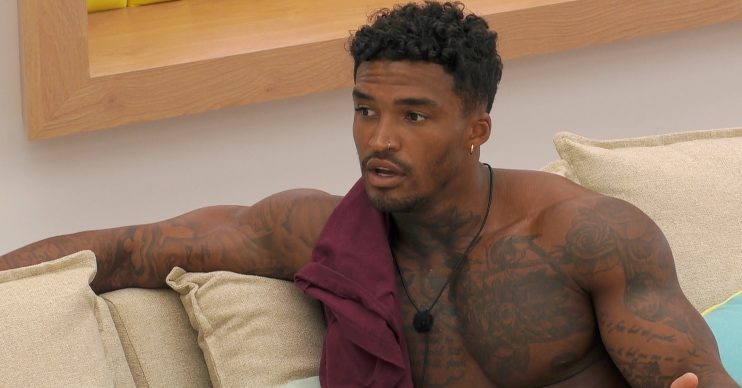 Love Island: Michael claims Joanna was always on his mind as he’s dumped from villa

He’s had a rollercoaster ride in the villa but tonight Michael’s Love Island journey came to an end.

The saved islanders then had to decide, in their couples, on one couple to keep in the villa.

All of the couples voted for Anna and Jordan, bar Ovie and India who decided upon Chris and Harley.

With no votes, Michael and Francesca had to leave.

In his first exit interview, Michael has set the record straight on his feelings about his time on the reality show, which saw him dump and devastate Amber after returning from Casa Amor to recouple with Joanna…

Michael said: “It’s been the most amazing experience of my life. I’ve made tremendous friends who I would now consider family.

“The people in there have been the easiest people to get along with, and at the same time the toughest.

“They have helped me through certain situations when I’ve been at a low point and also been understanding of when I’ve made decisions that were right for me.”

Speaking of some of the highlights, he said: “Making some of the best friends I’ve ever made and doing some of the funniest challenges ever. Making a friend in Amber, and also finding Joanna.

“Anton from day one I knew would be a great friend – when he said he wanted to couple up with me, I knew we would get along really well.

“I also had great bonds with Danny, Jordan, Curtis and Tommy.

He claimed he wouldn’t change his couplings, explaining: “Yewande helped me realise what a nice girl she was and we got on really well as time went on.

“I wouldn’t change anything with Amber and Joanna. I wanted to couple up with Joanna as the interest was there.

“And ending things in a couple with Francesca – I never realised how funny she was until that recoupling.”

Not too surprisingly, Michael thought recoupling with Joanna, and leaving Amber, was the toughest experience: “Probably when Casa Amor happened and me and Amber fell out.

“Not actually speaking to her was really challenging. We were really good friends and I felt like, because of the tension between us and the fact I was trying to move on with Joanna, it made it a lot harder.

“Getting past that was difficult.”

He’s hoping to speak to Joanna now he’s out: “I’m going to try and talk to Joanna but I know that she’ll have seen what’s gone on and I hope she understands I needed to make up to Amber.

“There was always going to be a natural draw between me and Amber because of how friendly we were. I did think about Joanna every day that she wasn’t there.

“She was always on my mind and I will try to speak to her.”