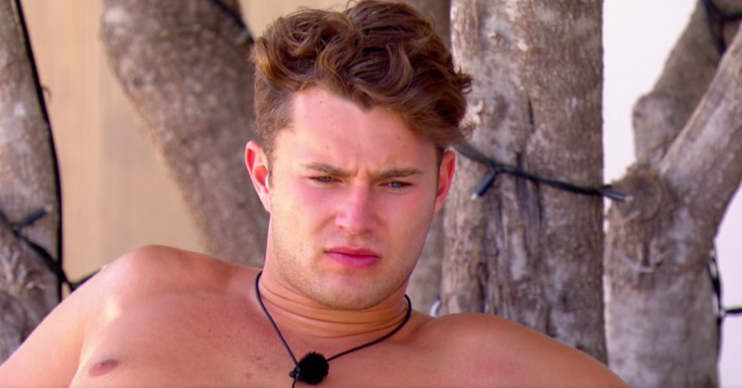 Love Island fans turn on Curtis and brand him “FAKE!”

He's been accused of faking his feelings for Amy

Curtis Pritchard is being branded as “fake” by Love Island fans, after it was revealed at the end of Monday night’s episode he told Jourdan he would choose her over Amy.

After being coupled up from the early days with Amy, he is now admitting his head is being turned since they’ve been separated with the introduction of Casa Amor.

The pro dancer  is questioning whether he wants to explore other potentials, in this instance Jourdan.

And Love Island fans have not reacted well to his admission to Jourdan last night: “Right off this second… I’d choose you.”

Jourdan looked quite surprised and said: “Are you sure?”

Read more: Kim Woodburn asks for a place in the Love Island villa

These comments sent social media crazy with fans saying he’s been faking his feelings towards Amy.

One tweet read: “Curtis switching vibes as soon as he clocked he ain’t top 3 with Amy, £25k makes someone bearable”.

Former Love Island contestant Gabby Allen tweeted that she is disappointed with Curtis saying: “Just let himself down.

“Regardless of everyone’s opinion of Amy, IMAGINE the guy you’re basically in a relationship with contemplating your pros and cons against a girl he’s known for 24 hours.”

“Is she ‘better’ than Amy?”…. oh no 😫Curtis just let himself down. Regardless of everyone’s opinion of Amy, IMAGINE the guy your basically in a relationship with contemplating your pros and cons against a girl he’s known for 24 hours 😫 #LoveIsland

I don’t even understand what wavelength Curtis is on…. no one swayed him and he’s there acting confused for no reason #LoveIsland pic.twitter.com/1HLXvlP7NL

Read more: Molly-Mae enjoys a three-way kiss behind Tommy’s back

Curtis has been playing the game from the start. He knew that coupling up and staying with one girl for longevity whilst acting as the mediator of the villa would make him likeable. He’s now realised him and Amy are not the public’s favourite and won’t win with her #loveisland

Their relationship will be tested as there is a looming re-coupling to see whether Curtis will stick by his “half-girlfriend” or be swayed in the new direction.

Who do you think Curtis will couple up with? Leave us a comment on our Facebook page @EntertainmentDailyFix and let us know what you think.