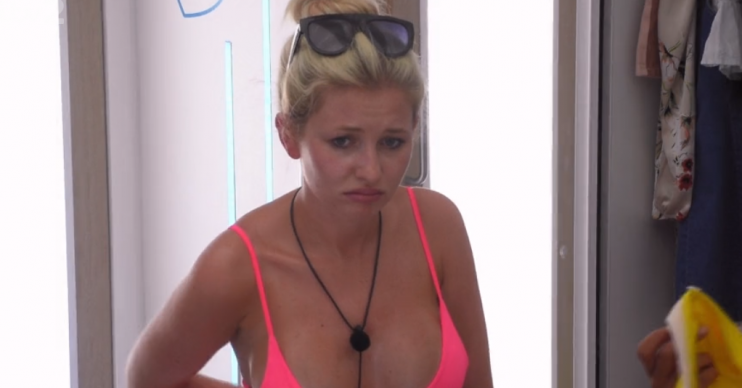 She wanted to give me a reminder...

Last night saw the boys and the girls split, with the ladies heading over to Casa Amor to meet six new guys while the boys stayed in the villa and were greeted by six new girls.

Former air hostess Amy was seen sneaking into the bedroom and placing her lace undies on top of his clothes in the drawer.

Viewers watching couldn’t get over Amy’s antics and shared their thoughts on Twitter.

One person said: “Still can’t get over why Amy left Curtis her thong in his drawer,” followed by a sick-face emoji.

Another wrote: “Amy leaving her thong, stop it #loveisland.”

A third tweeted: “Amy putting her thong with Curtis’ stuff and saying that cringey thing about her being by the pool sad. like, please go home.”

Amy putting her thong with Curtis’ stuff and saying that cringey thing about her being by the pool sad. like, please go home #loveisland pic.twitter.com/pdJPMs6y3U

Others found it hilarious.

One person added: “Did Amy really pack her thongs in Curtis drawers 😂😂😂😂🤦🏾‍♀️ this woman is something else lol.”

During Friday’s episode, the islanders are split into two groups as the girls head to Casa Amor, a separate villa used to shake things up in the series.

When the girls arrived at Casa Amor, host Caroline Flack told them: “While you are away, the boys are going to be going back to the villa.

“The boys will not be alone, they will be getting to know six new girls. But don’t worry they are not going to be having all the fun. I would not leave you on your own.

“There are six hot new boys here too. Shall we meet them? Girls, meet your new boys.”

In a teaser for Sunday night’s show, Michael was seen kissing the neck of Joanna during what appeared to be a challenge.

Back in Casa Amor, Anna was seen kissing basketball player Ovie despite being coupled up with Jordan.