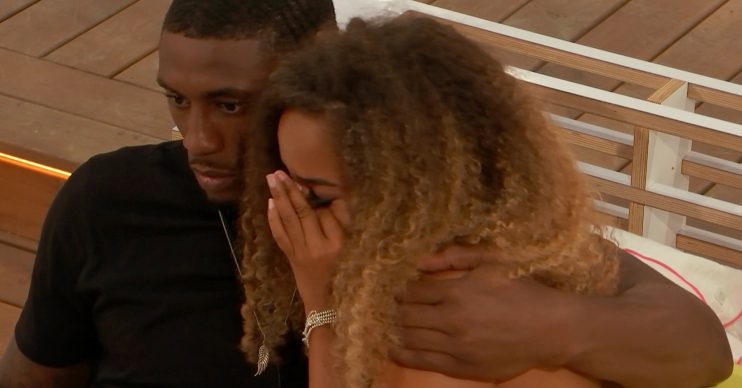 Love Island fans are convinced Ovie will crack on with Amber

Is there a possible new spark?

Last night’s explosive episode of Love Island showed Amber ending up in tears after a savage argument with Michael, and Ovie then offered his support.

Some fans now believe Amber and Ovie will get together.

The 21-year-old beautician was left single after Michael chose new girl Joanna in the dramatic recoupling.

We watched as results from the recoupling led to a massive row between Michael and Amber, as he never apologised for ditching her and simply pointed out all her issues, leaving her in bits.

However new islander Ovie Soko, who is currently coupled up with Anna, offered his comforting support whilst Amber expressed her emotions.

Now fans are convinced that Ovie and Amber will get together in a shock twist to the show.

This comes after also seeing Anna admit that she misses her previous man, Jordan, leaving some questioning whether she will ditch Ovie to go back to him.

One viewer said: “Plot twist – Amber gets with Ovie?”

Another agreed by tweeting: “Anyone saw how Ovie was holding and protecting Amber and Anna even when they were moving mad??? Yeah that’s a real man.”

Okay so Anna will get back with Jordan and Ovie will move to Amber a win win situation #LoveIsland pic.twitter.com/dnJcEZN2UZ

Can we appreciate how appreciate Ovie comforted Amber with Anna #loveisland pic.twitter.com/ni0k9K9Hre

Jordan to steal Anna back. Ovie to get with Amber. Amber will go through if Anna gives her the green light. I think Anna will. #LoveIsland

Anna will go back to Jordan and ovie will take amber #loveisland pic.twitter.com/qZ0iEoyJ7U

We’ll have to wait and see whether tables will turn and Amber will ditch Michael for good.