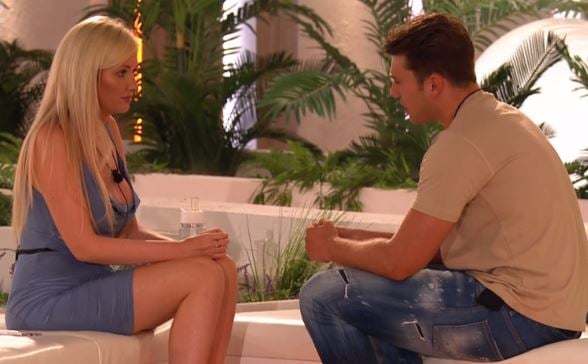 He says he "can't promise" his head won't be turned

The professional ballroom dancer has called time on his “half-relationship” with the air-hostess after four weeks coupled up because he “can’t promise” her that his head won’t be turned again if another lady walks into the villa that takes his fancy – just like Jourdan Riane did when Amy was away at Casa Amor earlier this week.

Read More: Love Island fans are convinced Ovie will crack on with Amber

He said: “I’ve meant everything I’ve said but I can’t promise you that this won’t happen again and I don’t want to hurt you how I’ve hurt you. It’s on me, everything is on me. And I am sorry for everything I have done to you. You have every right to say whatever you want about me or to me. I am truly sorry.”

Amy called Curtis in for a chat during tonight’s episode (04.07.19) after she spoke to Jourdan earlier on in the day to find out what happened between them while she was away pining after him and working out how she could tell him she “loves” him.

Amy fumed: “I feel like I was an acceptably average placeholder until you found someone better. I feel like I’m your back-up plan … I don’t think you actually fancy me. We’re supposed to be this fable half-boyfriend/half-girlfriend which makes me feel like an utter [bleep] because you were having meaningful snogs with other girls while I’m not here. Like, how is that okay? How is that acceptable?

“For me, it was absence makes the heart grow fonder but for you it was out of sight, out of mind … I’ve later found out that you were willing to throw away four weeks of what we’ve built together for the sake of two conversations.

“Now she must be bloody special. Even if you think with your head you like me, you clearly don’t. I was so loyal to you and you couldn’t give that back to me …

“I just feel like I’m the easy option. You knew that this would break my heart. And you still did it.”

The handsome dancer started off by defending himself and sweetening Amy up.

But the blonde beauty decided she wanted to take a “break” from him for a while.

She explained: “I want to be civil with you, I do want to talk to you but I need a break now to work out what I want to do. I’m not saying this is over forever if you want us to work still but you need to think about whether or not I’m actually what you want … Just say it, just rip the bandaid off.”

But Curtis had other ideas and decided to end things for good because he was worried that he wouldn’t be able to stay “loyal” to her outside of the villa.

The hunk landed himself in hot water earlier this week when he told Jourdan – who he kissed twice during tasks – that he would recouple with her because he fancied her, but he decided against it when she said she had feelings for Danny Williams.

Many viewers were not impressed…

I can’t be the only one that see’s a hint of evil in Curtis’s eyes?!

I feel bad for Amy but tbh.. i’m glad its all out in the open now! I’ve been holding my breath for the past 4 weeks waiting for this moment! It was soo Obvious that Curtis just wasn’t that into Amy! Next… #LoveIsland #Curtis #amy #CurtisandAmy

Girls: if he never says you're beautiful but does say you're talented, y'dumped. Maybe not today, maybe not tomorrow but it's in the post. #loveisland #curtis #amy

Leave us a comment on our Facebook page @EntertainmentDailyFix and let us know what you think of the drama.