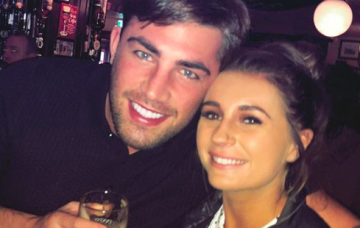 Oh how we wish this was true

Proving that she’ll do anything for a dare, Dani Dyer stunned fans on Tuesday morning by getting fake-engaged to her boyfriend Jack Fincham, live on radio.

The Love Island winner was on Capital Radio speaking to breakfast presenter Roman Kemp, when a listener texted in to dare her to “tweet that you just got engaged to Jack.”

Dani, 22, dutifully did as she was told, also posting it to her InstaStories, as Roman introduced her as: “The newly engaged, Miss Dani Dyer!”

Some fans were actually upset when they realised it was a joke, writing: “Fuming, I woke the Mrs up to tell her!!!”

Another added: “I think capital need to think of some better ‘pranks’ this was such a pathetic idea”.

Dani deleted her tweet and apologised, posting an image that said: “JOKING!!! It was a prank everyone! Blame Capital” with two cry-laughing faces, and adding: “I’m sorry 🙈🙈🙈 hahaha!”

She also retweeted one fan who’d written: “People are really annoyed that they played this prank, seriously 😂 it’s a JOKE and it doesn’t really affect anyone so 🤔🤔”.

She also took to InstaStories to explain in a video: “Listen it was a laugh, it was a joke, but no, it wasn’t true!”

It might’ve been a joke this time, but the pair – who are already living together after meeting this summer – have talked about marriage before.

Jack, 26, told The Sun recently: “We’re getting married next year, 100 per cent. Like my mum said to me so many times, ‘When you know about someone, you just know’. And now I know what she’s talking about.”

It follows last week’s news that the couple’s reality show has begun filming.

The pair are to appear in their own fly-on-the-wall series, alongside her soap star dad Danny.

The reality star who appeared on this summer’s series of Love Island confirmed: “Yeah, we’ve just sort of started. It’s exciting. It is hard work though, it’s sort of back to all that again, ain’t it? I’m like ‘oh no Dan, here we go again’.

The actress also confirmed that her grandad – who she calls ‘Bruv’ – will be taking part, adding: “Yeah, Bruv! Yeah, he goes ‘oh no, no I don’t want to go out!’ I can’t do a Spanish accent, that’s how he does it!”

We wonder how Danny Dyer Senior felt about this joke… Let’s hope he keeps a brown paper bag handy.

Will you be watching their new show? Leave us a comment on our Facebook page @EntertainmentDailyFix and let us know what you think.