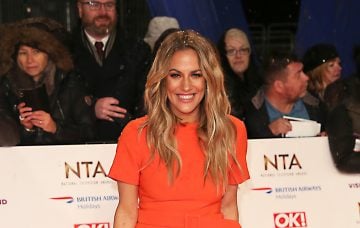 The presenter had to seek medical help

Caroline Flack nearly had to miss out on filming Love Island after a painful issue with her pelvis.

The 39-year-old presenter revealed she woke up in excruciating pain on Tuesday morning and had to visit a doctor to find out what was wrong.

She was due to be on the set of Love Island as filming for the new series kicked off this week.

Caroline explained that she was shocked to be told that her pelvis is out of line.

She said on her Instagram Stories: “I woke up this morning with an incredibly bad back. I went to an osteopath really early and they said I have a wonky pelvis, which was quite a revelation for a Tuesday!

“I then went to a physio who massaged my bum cheek for an hour which was really nice and then I had a really lovely masseuse to my house and massage my back.”

She then thanked the medics who had helped her as she feared she wouldn’t be able to make it to work.

“Thank you to everyone who helped me out today. I thought I wasn’t going to be able to go to work but with some firm action and some bum loving I can. Hurrah,” she added.

Once she made it to Love Island headquarters, Caroline gave her followers a sneaky peek from behind the scenes of the show.

“So, today we’re filming the Love Island advert,” she said.

“I really can’t give away too much because I’ll get told off. Last year I was dressed as a pilot, however, this year I’m not.”

She also gave fans a glimpse of her glitzy wardrobe and revealed some of the glam outfits she’ll be wearing on the ITV2 show.

Auditions are still underway for Love Island but Caroline revealed that she will have met some of the new cast that have been selected by the end of this week.

Are you going to be tuning into the new series? Leave us a comment on our Facebook page @EntertainmentDailyFix and let us know.