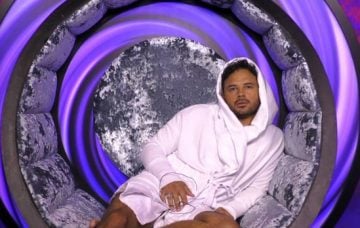 Ryan said there was "no malice" in his actions

The former Coronation Street actor was summoned to the diary room by Big Brother, where he was reprimanded for hurting Roxanne while “play fighting” and warned he would be removed from the show if it happened again.

Ryan said there was “no malice or anger in anything I did”.

Ex-Emmerdale star Roxanne had earlier told Big Brother she was upset by what happened, asking if she could speak to a member of production.

She said: “I need to speak to a member of production about something that’s made me feel really uncomfortable and I don’t want to go any further and talk on camera about something like this.”

In tears in the diary room, Roxanne said she was in shock, adding: “I’m just a little bit in shock. I went from being upset to being angry, because a boy has punched me repeatedly unprovoked, he actually punched me like a boxer would punch a bag.

The whole incident generated a lot of discussion on Twitter, with many viewers – and Ryan’s loved ones – expressing outrage.

His girlfriend Lucy Mecklenburgh urged viewers to complain to Ofcom, while brother Scott Thomas accused Roxanne of “trying to damage my brother’s reputation.”

A message sent from Ryan’s official Instagram after the episode aired read: “From the moment he walked in he’s just kept smiling and bringing the positive energy as much as possible! From his over the top reactions to his crazy laugh he’s been nothing but good fun!

“What happened tonight was ridiculously unfair and it’s actually scary to see how another individual can try and actively tarnish someone’s character! But thankfully the footage is there for everyone to see. Don’t let them dampen your light brother! Keep shining.”