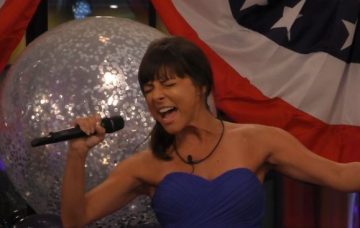 Did she fall or was she pushed?

The soap star, 35, had EVERYONE talking thanks to her very energetic and loud rendition of the American National Anthem, before falling into the swimming pool fully-clothed.

But was she pushed or did she jump?!

Some viewers accused Roxanne of deliberately falling into the pool for attention, rather than it being an accident, despite her looking rather shell-shocked when she emerged dripping wet.

Viewers were divided over Roxanne’s antics, with some branding her “attention-seeking” and others championing her for the win already.

One viewer said: “Roxanne is such an attention-seeker.”

But another wrote: “Queen Roxanne is gonna win CBB. Know that!”

Another agreed: “Roxanne to win! She’s so funny and so down to earth come on Roxanne.”

First up for Roxanne was perfecting the National Anthem for the episode’s Presidential Ball challenge; she was so loud while rehearsing in the Diary Room, all the housemates could hear her!

While belting out the anthem, she quipped: “I don’t know what’s happening to my voice!”

She added: “This is going to be bad for my career!”

Roxanne then performed the anthem in front of the other housemates to much applause, although not everyone at home was a fan.

Roxanne is so adorable, but singing isn't for her haha bless her #CBB #CBB Roxanne

Is it just me, or was Roxanne's singing very bad and cringe??? #CBB

Others, however, praised Roxanne for putting her heart and soul into it and said it was a classic BB moment.

Roxanne just gave me chills. What a voice! #CBB

Roxanne has such a beautiful voice ….. #CBB #CelebrityBigBrother

Later on, she stole the show again by falling into the pool while walking outside with Hardeep and Chloe.

Roxanne deliberately jumped in the pool.. this woman is an attention seeker wowwwww #cbb

Accident or not, other viewers LOVED the funny moment!

What do you think of Roxanne in CBB? Leave us a comment on our Facebook page @EntertainmentDailyFix and let us know what you think!