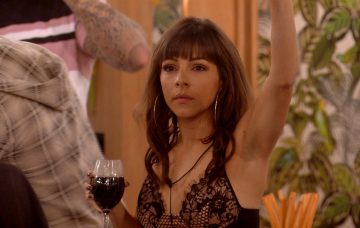 It's been one hell of a week in the house

Roxanne Pallett has QUIT the Celebrity Big Brother house following the ‘punching’ incident which has blown up this week.

A CBB spokesperson has said: “Roxanne has decided to leave the BB House. The remaining housemates have been informed.”

In Thursday night’s episode the former soap star accused fellow housemate Ryan Thomas of punching her like a boxer, after what he believed to be a play fighting incident in the kitchen.

She told the Diary Room: “I went from being upset to being angry, because a boy has punched me repeatedly, unprovoked.

She then begged to sleep in a separate bedroom to the others, claiming she didn’t feel safe.

Meanwhile, Ofcom received over 11,000 complaints, with many viewers calling for the 35-year-old actress to be removed from the house, and accusing her of making a mockery of abuse victims.

The father of one was adamant he’d never hurt anybody and he wanted to leave Celebrity Big Brother after hearing Roxanne’s complaint.

Elsewhere, Roxanne, 35, was seen breaking down in tears in the diary room as she claims Ryan “smirked” at her the morning after the incident.

She said: “I don’t feel very comfortable or happy today at the moment because I slept separately last night because I felt uncomfortable because Ryan assaulted me.

What are your thoughts about Roxanne quitting? Leave us a comment on our Facebook page @EntertainmentDailyFix and let us know what you think!