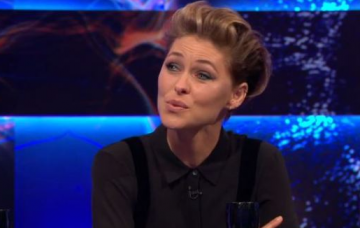 The presenter gets emotional on Bit On The Side

Emma Willis couldn’t hold back her emotions when she was asked about the cancellation of Big Brother as she kicked off series 19 last night.

The presenter opened up to Rylan Clark-Neal on Bit On The Side after the series launch, fighting back tears as she talked about her love for the show.

“This should be a positive thing because we should just f**king show everybody how great it is,” she said.

“And we should love it and embrace it and give it the send-off it deserves.”

Emma launched the 19th series of the show hours after finding out the show had been cancelled.

She claimed that the changes made for the new series – and for the recent series of Celebrity Big Brother – meant that the show was better than ever.

“I think they have taken all the brilliant bits from the past and brought them back and mixed them with something different for the future because it’s been on for a bloody long time and it has to be different,” she said.

She tried to hold back her tears as she continued.

“I am getting emotional now too. They’ve made a brilliant mix.”

The audience for Bit On The Side was full of Big Brother stars from past seasons.

Former housemates Lisa Appleton, Dexter Koh, Caroline Vincent and Joel Williams were among the BB stars in the audience.

Meanwhile Nikki Grahame, Alex Sibley, Jon Tickle and Kate Lawler were there to serve on the Big Brother aftershow panel.

What do you think about the Big Brother cancellation? Leave us a comment on our Facebook page @EntertainmentDailyFix and let us know what you think!