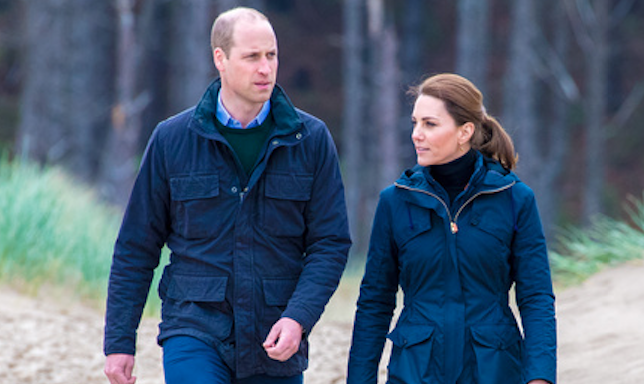 The Duke and Duchess of Cambridge have both been keen sailors ever since they were teenagers.

Both enjoyed rowing while at school and Kate Middleton continued to swing an oar as part of a team while at university.

However, an upcoming bout of bad weather has threatened to sink their hopes of facing one another in a sailing competition this week.

Rain and “adverse conditions” have been forecast for Friday’s event at Cowes in the Isle of Wight.

📅⛵ It’s one month to go until The King’s Cup! The Duke and Duchess of Cambridge will go head to head as skippers of individual sailing boats in an eight boat regatta race, in support of Their Royal Highnesses’ charitable causes. As we mark one month to go until the regatta, we’d like to introduce the charities that are being supported in this year’s King’s Cup: 2. Child Bereavement UK, who support children and families facing bereavement. 3. Centrepoint, the UK’s leading youth homelessness charity, which supports over 10,000 homeless young people each year. 4. London Air Ambulance Charity 30th Anniversary Campaign, which highlights the vital work of the Air Ambulance in delivering life-saving treatment across London. 5. Tusk, a charity working to amplify the impact of progressive conservation initiatives across Africa. 6. Action on Addiction, delivering effective programmes to support those affected by addiction to drugs and alcohol, their children and families. 7. Place2Be, working with families, teachers and schools to make a positive difference to children’s mental health. 8. The Anna Freud National Centre for Children and Families, building resilience in children and young people, and delivering pioneering mental health support to families for over 60 years. 9. The Royal Foundation, in connection with its Early Years programme — The Duchess’s focus on early childhood development. Their Royal Highnesses hope that The King’s Cup will become an annual event, bringing greater awareness to the wider benefits of sport, whist also raising support and funds for the causes that The Duke and Duchess support. To find out more about The King’s Cup, visit the link in our bio.

Read more: Harry Redknapp’s in trouble with his grandson Charley

And so it was announced this morning that the battle for The King’s Cup Trophy – with Prince William and Kate captaining opposing teams – has been rescheduled.

A statement on Twitter from @KensingtonRoyal noted the event was open to public spectators.

Funds raised by the event will go to charities such as Child Bereavement UK, Centrepoint, London Air Ambulance, Action on Addiction and Place2Be.

The trophy is said to be a cup first presented by King George V at Cowes’ Royal Yacht Squadron in 1920.

Earlier this year the royal couple revealed they hoped the event would become an annual fixture.

🇵🇰 The Duke and Duchess of Cambridge will undertake an official visit to Pakistan this autumn, at the request of the Foreign and Commonwealth Office. Further details will be advised in due course. Her Majesty The Queen visited Pakistan in 1961 and 1997, and The Prince of Wales and The Duchess of Cornwall visited in 2006. Swipe to see photos from the visits: 2. The Queen attends a State Banquet at the President’s House, Karachi, in 1961. 3. The Queen meets members of the Pakistan cricket team at the Rawalpindi cricket ground, in 1997. 4. The Prince of Wales and The Duchess of Cornwall at the Badshahi Mosque, Lahore, in 2006. Photos courtesy of the Press Association and @royalcollectiontrust #Pakistan #RoyalVisitPakistan