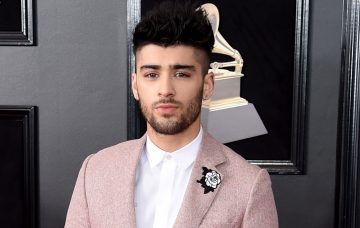 Zayn Malik shows off huge tattoo on his head

It's definitely out there...

Zayn Malik has shown off a giant floral tattoo on his head as he debuted his latest hairstyle.

The former One Direction star has an extensive collection of inkings – more than 60 to be precise – and on Tuesday the 25-year-old singer took a snap of his unique tat, which covers one side of his shaven head.

The photo sees Zayn debuting his freshly shaved hair as well as showing off his massive tattoo and giving a glimpse at some of his other inkings and piercings.

Although Zayn has had the tattoo since April this year, it seems some fans had forgotten he had the ink.

The Dusk Till Dawn hitmaker’s latest body art follows the rose he had on the back of his head, which came after he split with model Gigi Hadid, who he’s now back together with.

He also had the model’s eyes inked on his chest when they started dating.

Other pieces include a revolver handgun on his left hip, a huge snake on his right shoulder and a tiger on his upper left arm.

The singer got a tattoo tribute to his ex-fiancée, Little Mix star Perrie Edwards, on his right arm in 2013 when they were together and the inking could be seen on display in his video for Pillow Talk – in which he is seen kissing Gigi – but it has since been covered up.

Zayn also paid homage to his debut solo LP, Mind of Mine, by getting the title of the 2016 record inked on him.

Talking to Capital Radio during Dave Berry’s breakfast show, Zayn revealed at the time: “I just got a tattoo on my leg and my arm, I did them both in the same session. I got a tattoo for the album, the name of the album.”

The record was released on the anniversary of the day he made the decision to quit the world’s biggest boyband, One Direction, to go it alone.

And Zayn got one on his leg, which he admitted was “weird” as it features a man smoking.

He added: “The thing on my leg, it’s kind of weird, it’s an outline of a dude smoking which is pretty mega.”

What do you think of Zayn’s head tattoo? Do you have any tattoos? Leave us a comment on our Facebook page @EntertainmentDailyFix and let us know what you think!