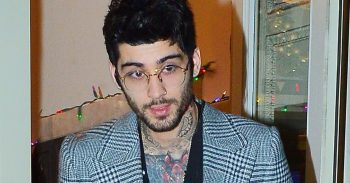 Zayn Malik apologised for being a “[bleep] person” before deleting his message.

The former One Direction singer posted the tweet on Saturday, but deleted it minutes later.

He wrote: “I’d like apologize for basically being a [bleep] person.”

Fans were quick to respond, with one person apparently writing: “Who hurt you who do I gotta fight.”

Another said: “No no don’t say that. Keep your head up Zayn,” while a third added: “Wtf are you talking about? You’re amazing & I love you.”

Zayn appeared to delete the tweet, but later shared a selfie.

The photo showed the star showing off his extensive collection of tattoos as he gazed into the distance.

Fans were quick to comment on the picture, with many telling Zayn to “take care”.

One person said: “Take care of yourself, Zayn. We are always here and proud of you.”

Another wrote: “Don’t EVER underestimate yourself. Look around you are see how many people you inspire, make happy, whose idol you are. We love you so so much, man.”

Ent Daily has contacted a rep for Zayn for comment.

It comes after Zayn’s former One Direction bandmate Louis Tomlinson admitted his relationship with Zayn has soured since he left the band in 2015.

Louis said his relationship with Zayn has “never really got better” after Zayn didn’t turn up to Louis’ first X Factor performance following the death of his mum in 2016.

Speaking to The Sun earlier this month, Louis said: “Truthfully it never really got better.

“I had a couple of calls with him after I lost my mum and all the boys had agreed to come to that performance and he didn’t show so that really bugged me.”

“It was just seeing everyone there –Harry [Styles], Niall [Horan], and Liam [Payne] – that was what I needed that night, that support. So on the other end of the spectrum, it kind of really showed. So, eh, I hope he’s alright, but..”