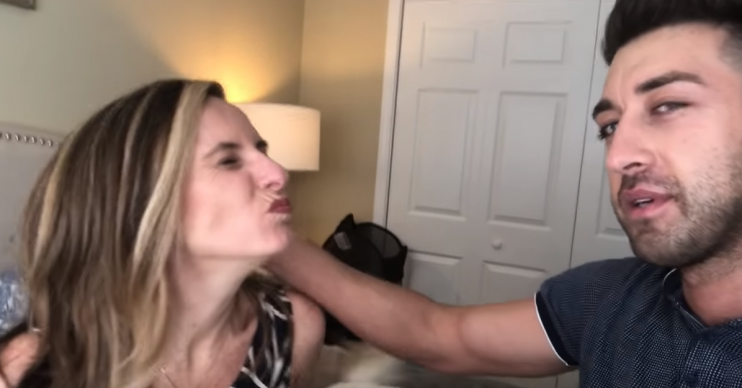 YouTuber who snogged his half-sister films himself kissing his mum

He's became viral because of his antics

A YouTuber who horrified his subscribers by posting a video of himself snogging his half-sister has now filmed himself kissing his mum.

Chris Monroe, the man behind the channel PrankInvasion, posted a second video on May 4 called Kissing My Actual Mom Prank.

Promising his followers that he was “going to top” his last viral clip, which was posted to the internet on March 22 and has racked up over seven million views, Chris began filming his mum doing the dishes at their home.

Read more: Internet horrified as YouTuber ‘snogs his sister for a prank’

In his new video, he told the camera: “I am going to kiss my mum. It feels so weird to say that but it’s going down.

“My mum is literally right there and this is even more nerve-wracking than my sister.

“My mum is doing dishes, she’s always doing something. But I am going to ask her to kiss me. Actually I don’t even know if I’m going to do it. I am just… I am nervous.”

He continued: “I am trying to catch her at a time when she is doing nothing. Because when I interrupt her and she’s busy, she gets so mad and she’s not going to want to do this for me.

“You can hear in my voice I’m so nervous because I am literally about to ask my mum to play a quick game for a quick kiss.”

He then approached his mum and asked her the question.

He said: “Mum, the video with [his half-sister] Kaitlyn went crazy, it went viral, and I need you to do the quick game for a kiss with me.”

Clearly horrified, his mum exclaimed: “No Christopher, I don’t want to do that!”

The camera then goes black with the writing: “My mom would not agree to do this… So I had to cut the camera and literally BEG her to do it!”

Then, Chris reappears on the screen sitting on the bed with his mum.

He told viewers: “I finally convinced my mum. That conversation was two hours, I’m not going to lie. [I] convinced her to come up here and play a quick game for a kiss.

“This is even worse than kissing Katilyn guys. I was sweating last time. I don’t know if you can see, I’m sweating now I’m so nervous.

“Alright, how are we going to angle this? Alright, here we go. Oh my god, I need a blindfold or something.”

His mum then puckered up her lips and squinted as Chris leaned in and kissed her.

They both quickly pulled away and Chris shouted: “Oh my god. What does that feel like for you as my mum kissing your son?”

She replied: “I feel like you’re two years old,” to which Chris said: “I’ve got to go wash my mouth right now.”

The video, which was posted a week ago, has already racked up 886K views.

The internet star went viral in March after filming himself snogging Kaitlyn O’Connor, who he claimed is his half-sister.

Their lips were locked for a full five seconds before a phone rang, interrupting them, and for some unknown reason they got back to it for even longer.

When they finished, Kaitlyn said: “I never want to do that again”.

What did you think of the videos? Leave us a comment on our Facebook page @EntertainmentDailyFix and let us know.