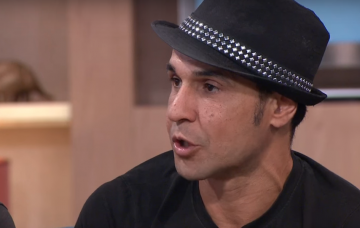 The performer, who was part of the 2005 series of the ITV series and had a number one hit with ‘Chico Time’, is believed to have been hospitalised three days ago.

The BBC have reported Chico fell ill returning from a gig he performed in at the weekend.

His family has described the news as a “great shock”.

A rep for Chico told MailOnline: “We can confirm that Chico has sadly suffered a stroke.

“This has been a great shock to Chico, his wife and their two children, also his close friends and family.

“We thank you in advance for giving Chico and the family some privacy at this time.

“Chico is now undergoing further tests and further statements will be released.”

The singer, whose real name is Yousseph and was born in Bridgend in Wales, has also appeared on ITV skating show Dancing On Ice.

He finished in third place on the 2012 series, replacing an injured Chesney Hawkes.

But it was his run to the finals of The X Factor that has brought him most fame.

He said in 2013: “Being on the show meant absolutely everything to me.

“It changed my life and my family’s.”

Married to artist manager Daniyela Rakic, Chico is dad to their two children Lalla-Khira and Zacharia.

The fitness enthusiast gave himself a clean bill of health during a 2015 interview, explaining a decision to work towards becoming a personal trainer.

He said: “You could say I was a walking advert for health and fitness, as I spent my whole life in some form of training or another, from martial arts to natural bodybuilding.

“I used to always give free advice to anyone who would listen, from nutrition to training tips so it seemed like a progression to go into it and do it on a bigger scale.”

Let us know what you think of our stories on our Facebook page @EntertainmentDailyFix.