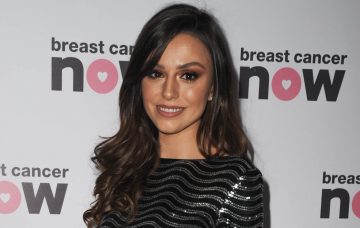 The 24-year-old singer confirmed in January that she’s expecting her first child – and also that she’s been quietly hard at work on her hugely anticipated new album.

Cher posted a lovely pic to Instagram on Wednesday afternoon showing her in a recording studio, bump clearly on display.

It was a simple enough image but enough to send fans crazy as they bombarded the star with excited messages about how much they’re looking forward to her new record – and baby! 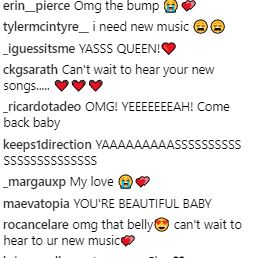 Cher made a rare TV appearance on Lorraine in February, where she said: “[The baby] is due in May, it’s just around the corner! I’m starting to think now, ‘Oh, this is coming up. It’s soon!’ I’m so happy.”

As well as starting a family, she’ll celebrate her fifth wedding anniversary with hairdresser husband Craig Monk this year.

“We come from such different backgrounds,” she said.

“He’s so lovely. I’m so lucky. We definitely are a solid team and I think we just deal with anything that’s thrown at us.

“We’re so excited to be starting the most incredible – I hate to say journey, as I hate that word – but we are. It’s like a new start.

“This year will be five years married and I don’t know where the time is going!

“Straight away I knew he was definitely the one.”

Cher found fame on the seventh series of X Factor back in 2010; it was the same series that launched the careers of One Direction, Rebecca Ferguson and Matt Cardle.

The popstar has also worked with major names including Demi Lovato and Taylor Swift – with the latter once baking her homemade cookies!

“She’s lovely,” said Cher. “She invited me to do a performance with her and came backstage into the dressing room and said, ‘I baked you these cookies’.

“I thought, first of all, where do you have the time? But she did and she was so lovely.

“She chatted to me for ages about music. It was amazing. Fantastic.”

Cher told Lorraine that while she spends a lot of time in America working, she’ll always call the UK home.

Right now she’s putting the finishing touches on her third album and is hoping to release its first single in the summer, after her baby is born.

Excited about new Cher Lloyd music? Leave us a comment on our Facebook page @EntertainmentDailyFix and let us know what you think!