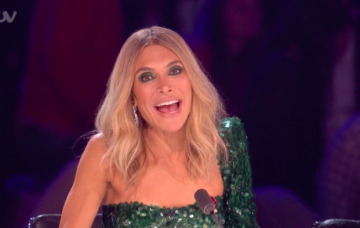 Is she really that much louder than the other judges?

The X Factor is about singing not shouting, but no-one told judge Ayda Field, it seems.

Viewers of Saturday night’s show pointed out the actress has an “annoying” habit of yelling when she gives feedback.

The judge – who is new to the panel, along with her husband and One Direction star Louis Tominson – divided fans as she spoke at a much higher volume than her co-stars.

One tweeted: “Why is Ayda shouting all the time! Does she not realise the mic is right in front of her face?! #XFactor.” Another complained: “@TheXFactor why does Ayda have to yell into her microphone 🙉🙈.”

A couple of rude viewers wrote: “Ayda’s big gob must give Robbie a headache. She needs to calm down,” and: “@Ayda_FieldsUK Your voice is one of the most annoying I have ever heard: very loud, shrill and screechy.”

Others said: “Just switched off, can’t stand listening Ayda’s annoying voice any longer!” while another added: “Can you try to get Ayda to stop screeching so loud down my TV. Thank goodness for the mute button.”

But many were much nicer about the mum-of-three, who married Robbie in 2010.

One wrote: “@Ayda_FieldsUK you so beautiful on the X Factor, hope your acts go though to next weekend.”

#Ayda is ready, are you?! ❌#XFactor pic.twitter.com/P7dgModFrP

Another tweeted: “Ayda was on point 2nite…so funny!”

A third added: “@Ayda_FieldsUK and her one liners towards @SimonCowell are original and [bleeping] hilarious #xfactor.”

It’s been a rocky few weeks for Simon Cowell’s musical empire. As well as a shocking knife attack at his Syco offices, it was revealed on Saturday that he’d lost Little Mix  from his Syco record label after a reported argument.

This year’s show has also been hit by several “fix” allegations.

As well as all that, fans have been divided by the absence of the Angels singer, who is currently on tour.

He’s been covered by musical legend Nile Rogers, with many calling for Robbie to be replaced for good.

Personally, we love Ayda. And you have to remember how loud it must be in that studio next to all the screaming fans…

Do you find Ayda funny or annoying? Leave us a comment on our Facebook page @EntertainmentDailyFix and let us know what you think.