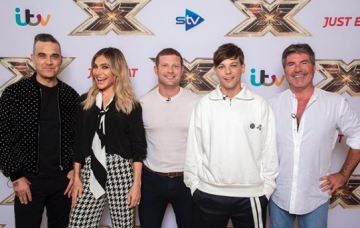 This sounds like a tough position to be in

They’ve only just started filming, but things are already heating up on the X Factor set.

Reports say new judge Louis Tomlinson was left in a difficult position when a contestant he knew auditioned.

In fact, the former One Direction singer allegedly refused to vote on whether his friend could go through, as it would be unfair.

Contestant Anthony Russell auditioned for the show last year, and Louis befriended him after he was forced to pull out to tackle “personal issues”.

When he came out on stage this week, reports say Louis told fellow judges Simon Cowell, Robbie Williams and Ayda Field: “After Anthony auditioned for this show last year and sang Issues with a black eye, he stole my heart straight away.

“He has had some struggles. I have really got to know him and his family and he is a really lovely guy.”

A friend reportedly told The Daily Mail: “Louis felt an affinity to Anthony when he was on the show last year. He believed he had a real future – as long as he could, and can, overcome his issues.

“He got in touch with Anthony as soon as he left the show last year and has been a constant friend to him in the last year.”

It comes as auditions with the brand new judging line-up continue with a vengeance. And the X Factor Instagram account has been posting behind the scenes pictures from the red carpet at Wembley Arena.

The shot of Robbie and his wife on Monday showed the singer wearing what followers joked were pyjamas.

Another wrote: “Is Robbie wearing his wife’s pjs 🤦🏻‍♀️😂”.

A third added: “Rob. What an idiot how can he wear pj to the Show?”

ED! has contacted reps for comment. If true, it looks like this could be the dramatic series ever…

Will you be watching this series? Leave us a comment on our Facebook page @EntertainmentDailyFix and let us know what you think.