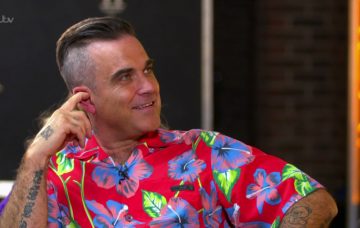 Nile Rodgers has been confirmed as Robbie Williams’ X Factor stand in.

The Grammy Award winner, 66, said he couldn’t turn down the chance to fill in as a guest judge for two weeks while Rob tours South America and Mexico.

He will sit on the the panel alongside Simon Cowell, Louis Tomlinson and Ayda Field for this Sunday’s show, as well as both next week’s Saturday and Sunday programmes (November 10th and 11th).

It has also been revealed he will host a masterclass for the Groups category Robbie is mentoring – and will also be on hand during this Saturday’s show to work with Robbie before he hands over the reins.

@louist91 @liampayne @thexfactor Yo, I’ve been asked to do tons of shows like this & mostly said no, but chopping it up w you guys made me see things differently. And Liam was singing some dope stuff to me off camera. Warmly, Big Bruh Nile

“I had such a great time with Louis at the Judges’ House in Ibiza a couple of weeks ago that when the opportunity came to step in for Robbie I could not say ‘no’,” he said.

“From CHIC and Sister Sledge to Duran Duran and Daft Punk, I’ve had great experiences with Groups in my career, so I look forward to giving them as much support as I can while Rob is away!”

But will the music legend find his loyalties stretched if one of Robbie’s groups is up for the elimination against one of Louis’ acts?

Head judge Simon recently revealed he had been keen to do whatever it takes to ensure the show went on WITH Robbie.

Talking at The Pride of Britain Awards earlier this week, the 59-year-old told The Mirror: “We’re going to try to fly him in. I can’t do the show without him.

“We knew in advance, but we’ll deal with it.”

Robbie had revealed in September he’d be missing a few X Factor live shows due to touring commitments made before he signed up with wife Ayda for the ITV series.

He told ITV’s Lorraine: “I’m genuinely gutted I’ve got to go. It was all booked in before, I’m going to go off and do a few gigs in South America.

“I’m looking forward to going down there because I haven’t been there forever but if I’d known, it wouldn’t be happening, put it that way.