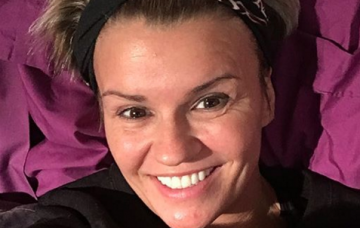 What a way to start the year!

It’s a new year, and it’s most definitely a new Kerry Katona!

The former pop star, 37, had a pretty rough 2017, what with splitting from her third husband George Kay, breaking up with her toyboy lover James English, leaving Atomic Kitten and watching helplessly as her teenage daughter moved to Ireland to study.

But the mum-of-five has found a brilliant way to cheer herself up – she’s lost an incredible two stone!

She shared a series of pics to Instagram in which she’s seen showing off her newly toned abs, and fans wasted no time in praising the Cheshire-born star for her achievement.

In the snaps, Kerry poses in her bedroom mirror, her fist clenched like an Olympic athlete. Her bright pink exercise top is rolled up to show off her slender, tattooed figure.

Alongside the pictures, she’s written: “Woohoo I’ve lost over 2 stone – feeling on top of the world! Big shout out to @ampikapickston #skinnyrevolution.”

For anyone who doesn’t know, Ampika Pickston is the Real Housewives of Cheshire star with whom Kerry was staying while she performed in pantomime in Manchester.

And it sounds like Ampika provided Kerry with the inspiration and knowhow to get her down a dress size or three.

The Mirror claims that using Ampika’s weight-loss clinic, the singer managed to lose the first stone in just two weeks.

And Ampika showed how proud she is of her buddy by posting a picture of the two women together, both looking rather svelte.

Fans were also thrilled with Kerry’s new look. One wrote in her message box: “You look fantastic – well done!”

Another added: “Amazing Kerry, such an inspiration.”

And a third agreed: “You look amazeballs. Well done girl.”

As for her love life, Kerry said earlier this year that she’s in no rush to meet a new man.

She wrote on Instagram: “I’m in a relationship with me. I make me happy and will never leave me.

“Single is good when you like yourself and don’t count on anyone else for your happiness!!”