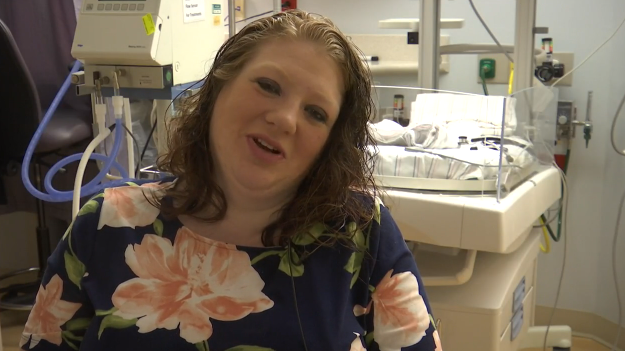 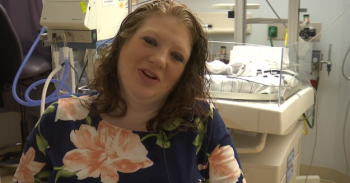 An American mum has opened up about giving birth to a 15-pound baby.

Joy Buckley welcomed her daughter Harper with her husband Norman last week at Arnot Ogden Medical Center in New York after previously being told she had a less than 15% chance of becoming pregnant.

Her little girl, who set a record as the largest baby born at the hospital, weighed a whopping 15lbs – making her potentially the biggest baby born in the state – and Joy said the delivery was “like being smashed by two trucks”.

Read more: Bride refuses to pay wedding photographer unless he fulfilled her ‘five-page list’ of demands

Joy revealed it took three doctors, a medical “vacuum” and a C-section to deliver 23.3-inch Harper.

Speaking to The New York Post, Joy said: “I felt like I was hit by two tractor-trailers. It was pretty violent. She got stuck under my ribcage.”

Joy said her daughter was placed in neonatal intensive care and was breathing with the help of an oxygen machine on Monday (March 18).

However, according to Joy, doctors said she is expected to be released from hospital soon.

She added: “I’m up moving around, and I can walk now. I’m so relieved to be done feeling that [physical] pressure.

“We are so in awe of her. We’ve been able to hold her. She’s got a pretty happy demeanour.”

A few years ago, Joy and Norman decided to adopt a daughter and soon after, Joy became pregnant.

She welcomed an 11lb baby boy via a C-section and two years later, Joy learned that she was pregnant again – this time with Harper.

Joy told TV station WETM: “The thing I’ve always wanted to do in my life is being a mum, and finding out the first time I was overjoyed, and the second time I was like, I’m going to be a mom to three kids now.

“It was something I’ve always wanted to do.”

She also said she wants other hopeful parents to keep trying if they’re struggling with infertility.

She added: “Don’t give up because it’s right there. It’s definitely right there, because my kids are total proof of that.”

According to The New York Post, officials from the New York Health Department – which tracks newborn baby weight data – were looking into whether Harper is the state’s largest baby ever.