Most people feel fear the morning after the night before, because many of us like to text our exes something that we will totally regret when sober

After a boozy night on the town, Annie picked up her phone to see if she’d text anyone in her drunken state.

And what she found was absolutely hilarious.

She had sent a text, but it wasn’t to an ex…

Annie slid into Gatwick Airport’s messages at 5.19 am which read: “Hey xx everything okay xx”.

She found it so funny, she decided to share it on Twitter and within minutes, it went viral.

She wrote: “Most people drunk text their ex or someone they fancy…. Not me…. What the actual f*** was going through my drunken mind”.

One wrote: “I love this so much. Airports need love sometimes, you know?”

Annie even got a direct response from Gatwick Airport’s Twitter account, who wrote: “U ok hun? We’re good. Thanks for asking xx.” 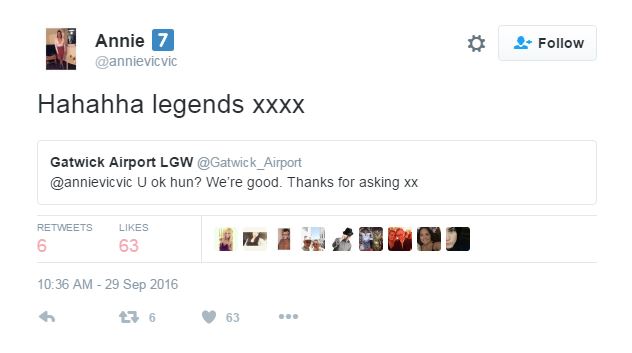 Annie shared the reply, but why she wanted to see if the airport was “ok” remains a mystery.

Well, at least you didn’t start chatting up an old flame!