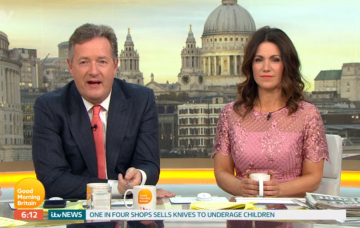 Piers Morgan winds up both Susanna Reid and Charlotte Hawkins

He was up to his usual tricks!

On Wednesday’s show, Piers did just that by giving Charlotte an unusual gift for her birthday, before poking fun at Susanna’s short dress.

The team kicked off the show by wishing Charlotte a happy 43rd birthday, and gifting her with a, er, flatulence odour eliminating blanket.

“Hands up everybody who is 42-years-old or younger,” Piers began.

Piers then teased Charlotte about getting older saying: “You’re not happy are you?”

Charlotte replied: “Well, it’s just as you get older you have more of them and birthdays come and go, it’s just another day.”

The team then brought out Charlotte’s gift as Piers said: “What can you get the woman who has everything? But we are very pleased with this.”

Explaining the meaning behind the gift, Piers: “You always get really cold in the studio so now you won’t be cold.”

“And it also deals with other issues which we’ve detected over last couple of years,” he joked.

Susanna quipped: “Or what you can do Charlotte, is keep it by your side and when Piers spouts too much hot air you can stifle him with it.”

Piers then told Charlotte: “We do actually have something nice for you… have we got cheap flowers from the garage?”

A crew member then brought out a huge bouquet of flowers.

“I can tell it’s going to be a special day,” Charlotte gushed.

Charlotte then revealed she’s heading to The Ivy for her birthday dinner with her husband and daughter this evening.

Meanwhile, Piers was up to his usual cheeky trips again during a commercial break as he poked fun at Susanna’s outfit on Twitter.

Piers took to social media to claim that the Good Morning Britain wardrobe department had appeared to forget to give Susanna the rest of her outfit. 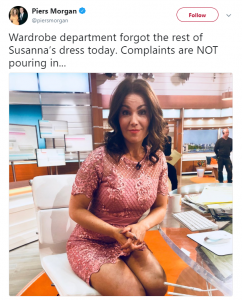 Piers shared a snap of Susanna showcasing her short pink dress as she sat behind the show’s desk.

He captioned the photo: “Wardrobe department forgot the rest of Susanna’s dress today. Complaints are NOT pouring in..”

What is the funniest birthday present you have received? Leave us a comment on our Facebook page @EntertainmentDailyFix and let us know what you think!