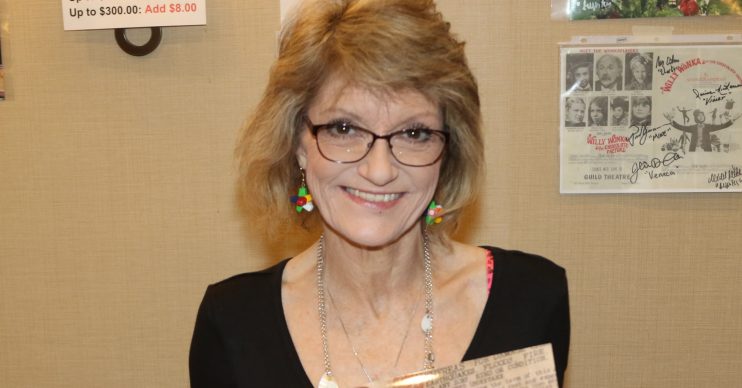 She passed away on Wednesday

Former actress Denise Nickerson has died at the age of 62.

The star was rushed to hospital on Monday (July 8) after relatives discovered she had taken as much of her prescription medication as she could.

According to reports, she was placed on life support on Tuesday after suffering a massive seizure.

But medics reportedly removed the respirator helping her breathe and stopped administering her medicine, telling the star’s family it was a matter of time until she passed away.

Yesterday (July 10), the Zero to Sixty actress’s relatives confirmed in an update on Facebook: “She’s gone.”

Denise’s son and his wife, Josh and Jasmine Nickerson, are understood to have been by her hospital bedside at the time.

They have also created a GoFundMe page to raise cash towards fulfilling Denise’s last wish – to be cremated and have her ashes turned into glass artwork.

In 2018, Denise spent time in intensive care after having a stroke. Her family later announced she had a pacemaker fitted and would probably require 24-hour care for the rest of her life.

Daughter-in-law Jasmine said of her health situation on Facebook in June last year: “It’s a waiting game. It’s the worst. She’s breathing on her own but they can’t remove the ventilator today because they don’t think she has the strength to cough and not aspirate.

“And know we’re faced with do we put her in a nursing home? Does one of us quit and stay with her constantly? We can’t afford to do either. We’ll be homeless.

“Her heart, her brain, and her lungs all fought against her yesterday. Did we do what she wanted? [sic]”

Before getting the Willy Wonka role that thrust her into the limelight, Denise – who quit her acting career in 1978, aged 21, to become a nurse – portrayed Allison in The Short Circus on The Electric Company, a spin-off series of beloved kids’ TV show Sesame Street.

She also acted in the US soap Search for Tomorrow and landed various big screen roles.