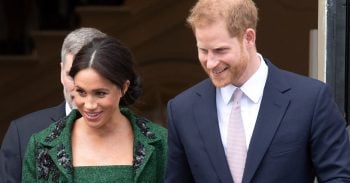 Will Prince Harry miss the birth of Baby Sussex?

We’ll literally beside ourselves as we await news about Meghan and Harry’s baby now!

And we’re beginning to worry that Harry might even miss out on seeing the royal arrival.

Yesterday a palace source took the unusual step of confirming that Baby Sussex isn’t here… yet.

The same day, Buckingham Palace revealed that Prince Harry will be travelling abroad in the middle of next week. Eek!

Meghan gave a clue about her due date when she told a well-wisher back in January that her baby was due at the end of April and beginning of May.

Everyone has been on tenterhooks for the past week, wondering when Baby Sussex will be welcomed into the world.

The Palace said of Harry’s plans yesterday: “While in the Netherlands, the Duke will undertake an official engagement in Amsterdam.

“His Royal Highness will then travel to the Hague to officially launch the one year countdown to the Invictus Games – The Hague 2020.”

So presumably everyone is confident the baby will have arrived by then… although Mother Nature is controlled by no one, not even royals…

Meanwhile Sir Elton John appears to be in the know about Baby Sussex better than the rest of us and has dropped the biggest hint yet that Meghan will give birth today.

The singer, who is good friends with Prince Harry, reckons the royal tot is due “any second”.

Head over to our Facebook page @EntertainmentDailyFix and let us know what you think of the ongoing Baby Sussex saga!