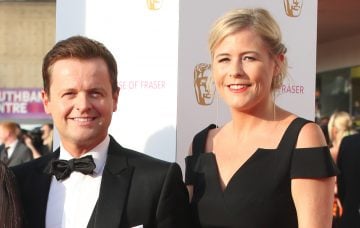 Dec Donnelly and wife Ali ‘expecting their first child’, according to reports

Declan Donnelly and his wife Ali are reportedly expecting their first child.

According to The Sun, the Ant & Dec star, 42, and his talent manager wife Ali, 40, are “absolutely delighted” about the happy baby news.

The TV star has yet to confirm the news and ED! has contacted Dec’s rep for comment.

A source said that Dec and Ali have “always wanted a family” and it’s “an experience that they see as the best of their lives.”

The insider added: “Dec comes from a big family himself and family has always been very important to him, as it is to Ali.

“They are both beyond excited at the prospect of being parents.”

The couple wed back in 2015 at a star-studded ceremony attended by the likes of Dec’s telly partner Ant McPartlin, and fellow presenters Holly Willoughby, Phillip Schofield, Paddy McGuinness and Fearne Cotton.

They tied the knot at St Michael’s Roman Catholic Church in Dec’s native Newcastle in August, after getting engaged the previous November in Australia.

Dec later told The Jonathan Ross Show that he’d proposed as the sun went down on their final day of the trip.

“It got to the last evening and we’d organised dinner on the beach and we went round to one side of the island, the only place on the island where you can see the sun set, and we just went round and we watched the sunset go down and we did it there, it was lovely.”

In an interview with The Sun’s Fabulous magazine last year, Dec had spoken of his desire to have kids with Ali.

He said: “Absolutely at some point, when the time is right… We’ll have to put some time in the diary. [Laughs] Things are pretty busy!”

“I’m really looking forward to that. Maybe it’s because we’ve turned 40. That milestone is making me think of the next stage of life now.”

Dec is currently preparing to host next weekend’s Saturday Night Takeaway solo, after Ant stepped down from current TV work.

He will front the final two episodes of the ITV series – including the finale from Florida – by himself following Ant’s decision to return to treatment.

Ant, 42, has been charged with drink-driving following a collision in London last weekend.

He is due to appear at Wimbledon Magistrates’ Court on April 4.