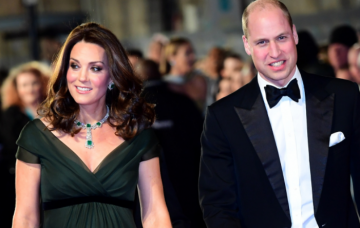 The Duchess of Cambridge bucked the trend in a dark green Jenny Packham dress for the glitzy Baftas ceremony.

Most nominees and other guests wore black to the awards in support of the Time’s Up campaign, following the example set at the Golden Globes in January in the wake of the Hollywood sexual harassment scandal.

However, there is a simple explanation for not following this year’s dress code – royals are expected to remain neutral in any political conversation or protest.

Kate paired her floor-length gown, complete with a thin black ribbon tied with a bow behind her back, with a diamond and emerald necklace and a clutch bag.

She arrived on the red carpet with husband the Duke of Cambridge, who told the audience at the Royal Albert Hall that Sir Ridley Scott’s films were amongst his own “personal favourites” as he presented the filmmaker with the Fellowship award.

William said: “The recipient of this year’s Fellowship – the highest honour the Academy can bestow – is a true cinema great.

“His films are amongst my own personal favourites.

“A director and producer whose work has engaged audiences for 40 years, and whose creativity continues to inspire the vital next generation of talent… please welcome to the stage, Sir Ridley Scott.”

While Sir Ridley’s films include classics such as Blade Runner, Alien and Gladiator, the director’s latest work suffered one major setback.

All The Money In The World had to be recast after its lead actor Kevin Spacey was accused of sexual assault, with Christopher Plummer stepping in to take his place.

The Fellowship award is the highest accolade given by Bafta to someone who has made an exceptional contribution to film, television, or video games.

Upon their arrival, William and Kate met the chief executive of Bafta, Amanda Berry, and a host of other representatives from the organisation.

What did you think of the Duchess’s outfit? Leave us a comment on our Facebook page @EntertainmentDailyFix and let us know what you think!