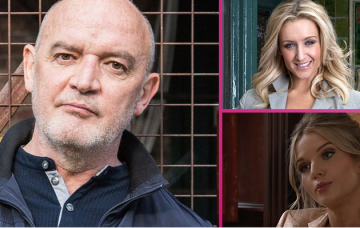 There’s so much coming and going in Weatherfield at the moment we thought it would be handy to have a definitive list of everyone who is about to leave the cobbles for good. Or for a bit depending on how their post-Corrie careers go.

Don’t say we don’t do anything for you.

Kate has only been at the Corrie helm for two years but she’s already bidding farewell to the cobbles after a controversial stint that has seen her come under fire for too many ‘dark storylines’.

Despite the initial criticism, the so-called dark storylines have actually been extremely well-received with Connor McIntrye (Phelan), Jack P Shepherd (David) and Shayne Ward (Aidan) all earning high praise for their acting.

As well all know evil builder Phelan is very much alive and well and will be heading back to the cobbles soon for his last stand.

While the residents of the Street have all assumed the murderer had died when his wife Eileen pushed him into the Irish sea, he actually survived the fall.

He’s been living in a B&B but recently checked out after spotting Eileen on the news and deciding to head back to Weatherfield to take care of his unfinished business.

Connor teased his psychotic character’s last scenes to Metro.co.uk saying: “Let’s just say this – he comes to the conclusion after Whitehaven that he has got very little left to lose.

“Bearing in mind his mindset – it’s true to say that everybody, even the people you wouldn’t expect, need to watch out.”

Cath will bow out of her role in the ITV soap in the coming weeks but it’s not yet known how she’ll make her exit.

Corrie fans will see how Eva reacts when she hears the news that her ex boyfriend Aidan Connor has taken his own life this week.

She’s recently given birth to his daughter, but has handed the little girl over to Toyah Battersby who is pretending it’s the baby she had through a surrogate.

But now Aidan is dead we can’t help but wonder if Eva will be taking the baby with her when she leaves.

Rosie Webster will be bidding goodbye – temporarily – to the cobbles as Helen Flanagan heads off to have her second baby with Scott Sinclair.

She started her mat leave two weeks ago and has been posting pictures of her huge baby bump on Instagram.

We don’t know how Rosie will be leaving the cobbles yet but Helen told the Loose Women panel that the exit would be typically Rosie and she’d go out in style.

During a recent appearance she said: “I’m going out in very much a Rosie style – the storyline is hilarious.

“But I have enjoyed that about my character, doing comedy has been great.”

Qasim – who has played Zeedan for four years – also announced he was off earlier this year.

He told Digital Spy: “I’ve always been really ambitious and I still have that fire and hunger in my belly where I want to explore and do other projects.

“Because I am seeing so much more diversity in shows nowadays and the pressure that shows have got to introduce more Asian and black actors into things, I feel like it’s a great time for me to be out there.”

Not much is known about Zeedan’s exit storyline but fans have been speculating that he could go down for murder after accidentally killing a man hassling Kate Connor and his estranged wife Rana.

Who will you miss the most? Leave us a comment on our Facebook page @EntertainmentDailyFix and let us know what you think!