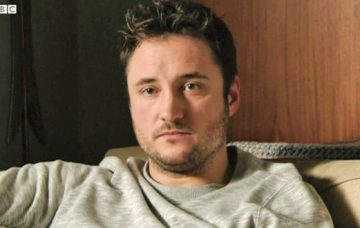 EastEnders: Who will Martin Fowler choose – Sonia or Stacey?

It's a troublesome love triangle...

The hapless market stall trader (played by James Bye) has his love life turned upside down when ex-wife Sonia makes a move on him and leans in for a kiss.

This has the makings of quite an explosive love triangle, made more complicated by Martin and Sonia’s daughter Bex who notices the growing chemistry between them – and longs for them to reunite.

In forthcoming scenes, Sonia finally gives in to her resurfacing feelings for Martin when she sneaks a kiss as he lays asleep on the sofa.

While Sonia’s old feelings have come back with a vengeance, we know that Martin is actually laid up on the sofa nursing a back injury from protecting estranged wife Stacey from a spot of bother at E20!

It’s a complicated week for the fruit and veg seller when he jumps to defend Stacey’s honour as another bloke comes on too strong at the Walford nightclub.

However, punching his love rival causes Martin to hurt his back…

Feeing grateful to him, Stacey helps him home and, as they walk, she leans in for a kiss – but how will Martin respond?

Later the same week, Sonia is enjoying playing nurse. And, when Martin dozes on the couch, she kisses him on the lips, telling him she loved him once.

Needless to say, the two feisty females end up fighting over their man – but who will Martin chose?

In an online poll conducted on EastEnders Weekly Podcast Twitter page, 47% believed Stacey is Martin’s true love, with only 32% voting for Sonia.

Another 15% voted for Kush, while 6% opted for Hayley.

Twitter fans seem divided, with one saying: “He should go back to Stacey, not minging Sonia.”

Another said: “Martin should be with Stacey because they seemed a lot happier than when he was with Sonia.”

A third thought Martin and Sonia was the better match, writing: “Probably. If I had a choice (or if I was Martin) I’d choose Sonia and Bex. Stacey, Whit, Tiff, other Slaters under 1 roof shouting? Forget it!”

Probably. If I had a choice (or if I was Martin) I’d choose Sonia and Bex. Stacey, Whit, Tiff, other Slaters under 1 roof shouting? Forget it!

Thresome for Sonia, Martin and Stacey?? Sonia really wouldn't mind and stace is up for anything except being a housewife thats beyond her#Eastenders

@bbceastenders #EastEnders Thank God! Please don't reunite Martin and Stacey, she's so more interesting without him. Put him back with Sonia.

Oh Martin don’t let Stacey near you! And stay away from Sonia too! They ain’t no good. #EastEnders

@bbceastenders #EastEnders Stacey was in the wrong for cheating on Martin with Max, but Martin never liked Stacey's bond/history with Max anyway, which will always be there. Stacey's a more interesting character without Martin. Martin can get back with Sonia.

Sonia got another vote from a soap fan, who tweeted: “Sonia! Stacey is a much interesting and dynamic character without nice, but boring drip Martin trying to turn her into a Pauline clone.”

“For god sake just get Stacey and Martin back together Sonia can have Tina,” blasted another.

Who do YOU think Martin should end up with? Leave us a comment on our Facebook page @EntertainmentDailyFix and let us know what you think!