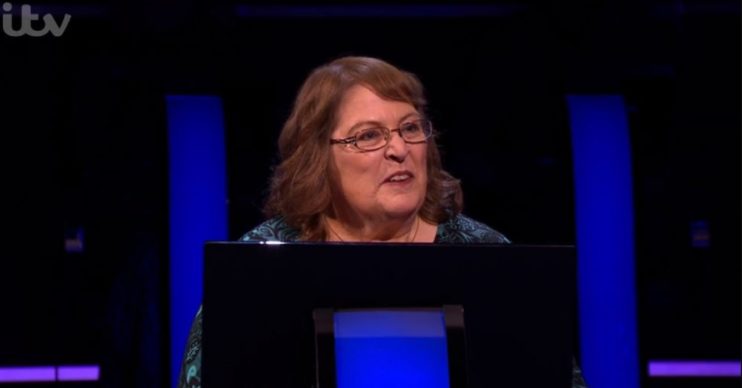 Who Wants To Be A Millionaire: Viewers stunned as contestant uses lifelines on ‘easy’ questions before getting £1,000

ITV viewers were stunned when a contestant on Who Wants To Be A Millionaire had to use up two of her lifelines before even getting £1,000 in the pot.

Read more: Did Charles Ingram ever get his prize money after cheating on Who Wants To Be A Millionaire?

But unfortunately, she hit a number of significant stumbling blocks very early on.

What were her questions?

For her £500 question, she was asked: “What was the title of the UK Number 1 single by Shaggy featuring RikRok?”

As she wasn’t sure of the answer, which was It Wasn’t Me, she decided to ask the audience – and a whopping 90 per cent knew it.

Then for £1,000, Lynne was asked: “Which of these brands typically sells their salt and vinegar flavoured crisps in a green packet?”

She didn’t know that it was Walkers which uses green for salt and vinegar.

“That’s okay. That’s what they’re there for,” Jeremy reassured her.

But it seems viewers at home didn’t quite feel the same way. Many were stunned to see someone use up half their lifelines so early on.

One said on Twitter, alongside a face-palm emoji: “Imagine using two lifelines to get to £1,000 #wwtbam.”

Someone else, more sympathetic, tweeted: “#wwtbam Feel for this woman even though they were easy questions before the 1,000, there were other answers that could cast a little doubt.

“Walkers/Golden Wonder and the Shaggy one she knew, just not 100 per cent.”

A fourth, seeing the irony in what came after, said: “Lynne only getting £1,000 on @MillionaireUK was about right after wasting two lifelines before actually getting to £1,000. #WhoWantsToBeAMillionaire #millionaire #wwtbamillionaire.”

“Anyone who doesn’t know Walkers crisp packet colours deserves to be squirted with a water pistol,” insisted a fifth.

Another said with an angry emoji: #wwtbamillionaire what a waste of two lifelines.”

Lyn only getting £1000 on @MillionaireUK was about right after wasting 2 lifelines before actually getting to £1000. #WhoWantsToBeAMillionaire #millionaire #wwtbamillionaire

Anyone who doesn’t know Walkers crisp packet colours deserves to be squirted with a water pistol. #wwtbamillionaire #wwtbam #WhoWantsToBeAMillionaire

Lynne got the crisps question right with the help of the 50/50 lifeline and fared better in the proceeding questions.

How far did Lynne get?

“If you did win a lot, and I don’t think you will now…” Jeremy asked her. “You could surprise us all! But if you did, what would you do with it?”

Read more: Take the Who Wants To Be A Millionaire quiz Charles Ingram cheated on – could you do any better?

It presented four significant events and asked which one happened in the same year Prince William and Kate Middleton got married.

She phoned a friend but got nothing concrete to work with. Lynne guessed it was the 2012 Olympics. Unfortunately, Will and Kate tied the knot a year earlier – the same year the News of the World closed.