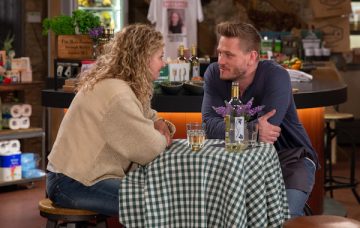 All you need to know about Emmerdale’s Maya Cavanagh

David's smitten but who the heck is she?

David Metcalfe is getting closer and closer to Dr.Cavanagh’s wife Maya in the ITV soap, but it’s left a lot of viewers wondering who she is.

David has seen bonding with Maya over their marriage woes; in fact they got so close they very nearly kissed. Unfortunately the whole thing was seen by Dr. C and then  David’s estranged wife Tracy got wind of it, apparently scuppering all hope of her taking him back.

Obviously after catching David up to his old tricks, she changed her mind and decided to press ahead with the divorce.

Will this leave the path clear for David to pursue Maya?

Here’s the lowdown on the latest blonde bombshell to catch David’s eye.

Maya Cavanagh nee Stepney is the wife of Liam Cavanagh and the mother of Leanna Cavanagh.

As well as being married to the local doc, she’s a teacher at Hotton Academy. What a respectable middle class couple, they are!

She made her first appearance in the ITV soap back in March when she and Liam met with David, his wife Tracy and Jacob for dinner.

Sadly the dinner was ruined when Tracy thought David was ashamed of her for her prostitute past and blurted it out in front of the doctor and his wife.

It’s thought that both Maya and Liam will become more prominent characters in Emmerdale as David and Maya’s affair storyline develops over the next few months.

But what does this mean for David and Tracy who Emmerdale fans suspect is pregnant following her romp with her estranged husband last week?

Maya is played by actress Louisa Clein who is no stranger to the small screen.

As well as Emmerdale, she’s starred in Judge John Deed, Holby City and The Railway Children.  She’s also appeared in Doctors and Casualty.

Louisa’s got a pretty impressive family tree too. Her mum is a professional violinist and her sister Natalie is a famous cellist.

As well as TV, Louisa has an amazing record as a theatre actor and in 2010 starred opposite Lee Mead in the Oscar Wilde play Lord Arthur Savile’s crime.

We look forward to see lots more of Louisa on our screens.

What do you think of David and Maya? Leave us a comment on our Facebook page @EntertainmentDailyFix and let us know.

Emmerdale airs week nights at 7pm on ITV with an extra episode on Thursdays at 8pm. Times may vary due to World Cup fixtures.