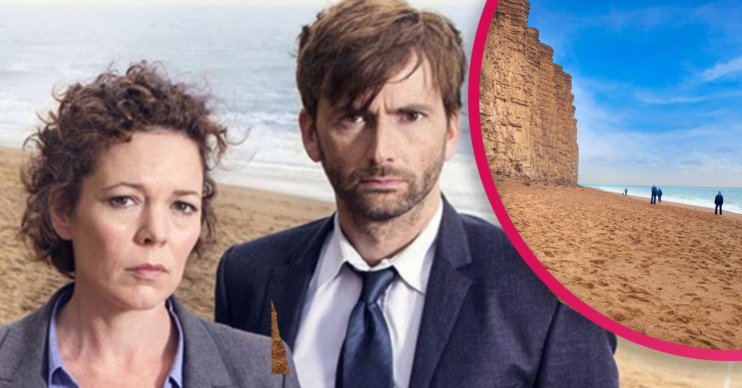 Where is Broadchurch filmed? Here’s how you can visit the stunning filming locations in real life

Broadchurch tours have been launched for fans

Broadchurch fans are in for a treat.

ITV is airing the entire first series again after running out of new material during lockdown.

So prepare to take a trip down memory lane with DI Alec Hardy Detective Ellie Miller.

But where is Broadchurch filmed and can fans visit the locations in real life?

Where is Broadchurch filmed?

Broadchurch is not a real place.

The town is a fictional setting conjured up by writer Chris Chibnall.

However, fans can visit the stunning locations featured in the series.

You see, while it may not go by the name of Broadchurch, the village is very much real.

The Broadchurch  you see on telly is actually the village of West Bay in Dorset, which sits along the Jurassic Coast harbour.

Broadchurch writer Chris grew up in the area and said the show was “written as a love letter to the scenery of the Jurassic Coast”.

He added: “The landscape informs the drama: the cliffs, the sea, the beach were all key elements of the story.”

Later on in the series, filming also took place in Clevedon, Bristol, Charmouth and Portishead.

Where is the beach in Broadchurch?

There are two main beaches feature in Broadchurch – West Bay Beach and Charmouth.

West Bay Beach and its stunning cliffs is where the body of schoolboy Danny Latimer is found in series one.

“It was absolutely wonderful being down in Dorset, really beautiful,” said Julie Hesmondhalgh, who played Trish Winterman in series three.

She added: “I had a period of time in the summer when I was down a lot and I had a little caravan on the beach (Freshwater Beach Holiday Park).

“I used to walk over the cliffs to West Bay to work in the morning and in the middle of summer it was absolutely lovely.  It doesn’t get any better than that!”

In series two, the beach scenes were filmed at Charmouth, which is a little further west down the coast.

Here is where you’ll find the famous blue beach huts.

Are there Broadchurch tours?

Yes – following the success of series one, the Broadchurch Trail was launched.

Tourists can follow in the footsteps of Hardy and Miller by strolling up West Cliff before venturing to the Jurassic Piers and harbour.

David Tennant, who played Hardy, admitted he would miss filming on location in Dorset after Broadchurch ended.

He said: “West Bay and the Jurassic coastline I will definately need to visit because there is something very special about that place and it is an extraordinary part of the country.”

Olivia Colman, who played Miller, added: “Being on the cliff at Bridport in the sunshine during the first week of filming was just amazing. Idyllic.”