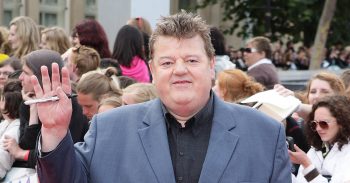 He's due to have a knee operation in America

Robbie Coltrane has been confined to a wheelchair and reportedly suffers “constant paint” from osteoarthritis.

The actor, 69, best known as Hogwarts gamekeeper Rubeus Hagrid from the Harry Potter films, is said to be unable to walk as he awaits potentially life-changing knee surgery.

Robbie made his first public appearance this week since taking to the wheelchair.

The Cracker star was at the Renaissance Hotel in London for the press launch of Hagrid’s Magical Creatures Motorbike ride, a new attraction at Universal Orlando and Blooloop shared a photo of the star to their Twitter feed.

Speaking to The Sun, a source claimed the star’s knee is “constantly deteriorating” and he has been “in constant pain for years”.

These days, they said, he is “unable to walk without any assistance” and finds his condition “hugely frustrating”.

Robbie is reportedly heading to America for an operation to repair his knee.

The source said: “He was wheeled in and out of the Harry Potter event on Monday which came as a big shock to fans given they’re so used to seeing him standing strong and tall as Hagrid.”

According to The Sun, Robbie revealed at the event that he expects to be “leaping around like an elf” once’s he’s had the op.

His last acting role was in Operation Yewtree-inspired Channel 4 series National Treasure, in which he played Paul Finchley, a TV comedian accused of sexually assaulting a 15-year-old girl.

In an interview at the time with The Guardian, he was asked if he anticipated criticism from people who don’t think real-life tragedy should be turned into TV entertainment.

Read more: Guess which DWTS pro this Harry Potter film extra grew up to be

He told the publication: “Drama has always illuminated what’s actually going on in society, in a way that the news or the internet doesn’t.

“There’s total respect for people who actually were attacked. That’s the important thing for me.”

We’re wishing Robbie a speedy recovery! Leave us a comment on our Facebook page @EntertainmentDailyFix and let us know what you think of this story.